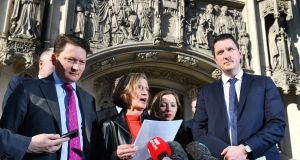 Geraldine Finucane has the face of a woman used to suffering deeply private pain in public. It is clear that immense strength must be needed to maintain that composure.

For 30 years she has had to stand in the glare of cameras in front of lawyers’ offices, court rooms, parliament, 10 Downing Street, and elsewhere, describing the latest way in which successive British governments have thwarted her in her quest for the truth to be revealed about the murder of her husband, Pat, in 1989. But last week she appeared hardly able to contain her anger and distress.

No wonder. The Secretary of State for Northern Ireland, Brandon Lewis, had just announced that the UK government would not order an independent inquiry into the murder. He did so almost two years after the UK Supreme Court unanimously found that the state had failed to date to meet the standards required under Article 2 of the European Convention on Human Rights.

It was Lord Brian Kerr, a former Northern Ireland chief justice, who delivered the judgement. (Sadly, Lord Kerr died last week.) He concluded that it was for the government to decide what to do to put this right. Geraldine Finucane had welcomed the outcome as “a great victory” for her family, adding, as she has always done, “other people need to know the truth as well”.

The British government does not care

And they do. Around half of the 4,000 murders, and countless other atrocities, carried out during the Northern conflict have not been resolved.

There are families who were never visited by the police after the murder of a loved one, who were not told about court cases and inquests, who got left in the queue when a Historical Enquiries Team (HET) was abruptly shut down in 2013, who have endured 20 years of stop and start delays for an inquest, or are waiting for a review by the Police Ombudsman.

These people include Protestants, Catholics and others whose loved ones were killed by loyalists, republicans, and members of the security forces.

While Sinn Féin, the SDLP, Alliance and the Greens all expressed outrage at the Finucane decision, the North’s unionist parties welcomed it and reacted as if collusion was a republican conspiracy theory, fake news, and as if the Finucanes were looking for elite treatment in demanding a public inquiry. Yet Tory prime minister David Cameron had admitted in 2012 there were “shocking levels” of collusion in the Finucane case.

Both the DUP and the UUP opined last week that it was crucial not to create a “hierarchy of victims” and used the highly contested term “innocent victims”. They serve their own people badly with this stance. Because if the British government has its way, no one is getting truth or justice.

In February this year after the institutions at Stormont had been cranked back into operation with a set of arrangements called New Decade, New Approach, newly-appointed Lewis declared the government “absolutely committed” to implementing the Stormont House Agreement (SHA) on dealing with outstanding legacy issues. It would, in fact, be done in 100 days.

Now, the SHA was made in 2014 and had been superseded by the Fresh Start deal of 2016 which considerably reduced its capacity and wasn’t implemented either. So Lewis’s announcement was met with scepticism, to say the least. What happened next was by any standards shocking. On March 18th, with neither negotiation nor warning, Lewis effectively binned the SHA.

“A new independent body will conduct swift, final examinations of all the unresolved deaths. Only those cases where there is new compelling evidence and a realistic prospect of prosecution will be investigated,” he said, adding that this had been decided in the interests of “victims who suffered unimaginable pain” and in order to “ease the difficult process of reconciliation”.

Lewis was effectively announcing an amnesty in relation to around 90 per cent of investigations. Forget the Belfast Agreement. It was obvious that the main purpose was to end what Lewis called “vexatious claims against veterans”.

WAVE, the North’s largest victims and survivors group, had just that day been preparing its clients for inevitable restrictions to its support services because of alarming news of the arrival of the Covid-19 pandemic. It described the timing of the announcement as “immoral” and “shameful”.

There is already ample evidence that the sort of reviews implied would not work, not least because state agencies habitually frustrate attempts to get access to information they hold. Nor would they be compliant with Article 2 of the ECHR. Sandra Peake, CEO of WAVE, said Lewis was “dangerously deluded” if he thought this would help reconciliation.

Adding insult to injury, Lewis last week claimed that he had made no progress on legacy issues since his March announcement because WAVE had asked him to halt work on them. It had done so such thing. Lewis had not even bothered to contribute to a Northern Ireland Affairs Committee meeting in the summer at which WAVE and others put forward constructive legacy proposals.

The British government does not care. Any day now, Boris Johnson will shamble up to some podium and say with that bogus bonhomie which is his idea of gravitas, “Let’s get legacy done”. We know how that goes.