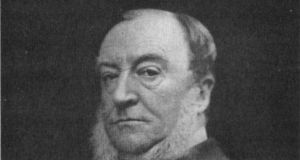 Sir William Gregory introduced the ‘Gregory clause’ to the Poor Law Bill that became law at the height of the Famine. Its effect was that starving families on holdings of a quarter-acre or more would not receive outdoor relief, or be admitted to a workhouse, unless they abandoned the tenancy.

William Shakespeare’s observation that “the evil that men do lives after them; the good is oft interred with their bones” fits the fate of Sir William Gregory, who was a member of parliament for Dublin and, later, for Galway during the middle decades of the 19th century.

“Mr Gregory’s name entered Irish history as a curse,” wrote the Famine historian John Kelly. “By his conduct throughout the spring of 1847 Gregory had made his name one of the most detested in Ireland,” agreed biographer Brian Jenkins.

They were referring to a clause that Gregory successfully added to the Poor Law Bill that became law at the height of the Famine. Its effect was that starving families on holdings of a quarter-acre or more would not receive outdoor relief, or be admitted to a workhouse, unless they abandoned the tenancy.

“The Gregory clause should be forever remembered by the descendants of the slaughtered and expatriated small farmers of Ireland,” wrote the first Famine historian, Canon John O’Rourke, in 1874. He described it as “the never-to-be-forgotten quarter-acre Gregory clause,” and said that “a more complete engine for the slaughter and expatriation of a people was never designed”.

Gregory acknowledged that the clause won him “an evil reputation,” but he argued that it did more good than harm. “There is no doubt but that the immediate effect of the clause was severe,” he wrote in his autobiography, adding: “Old Archbishop MacHale never forgave me on account of it, but it pulled up suddenly the country from falling into an open pit of pauperism on the verge of which it stood [and] those who really understood the condition of the country have always regarded this clause as its salvation.”

The autobiography mentions other deeds that might meet Shakespeare’s “good” criterion. In 1859 Gregory sponsored a Bill that overturned a Poor Law Board decision that workhouse children whose religion could not be ascertained, but who were overwhelmingly the offspring of Catholic parents, be brought up as belonging to the Church of England, and in 1865 he backed the Roman Catholic Oaths Bill, which did away with certain offensive oaths that Catholics had to take. He helped the Royal Irish Academy to purchase the Tara Brooch after its discovery in 1850 and also to acquire original manuscripts of the antiquarian and landscape painter George Petrie, while also helping to ensure that the academy was not subsumed into the Royal Dublin Society. He insisted that the Botanic Gardens in Glasnevin, Dublin, be open to the public on Sundays, when previously they had been reserved for the private enjoyment of RDS members and their families on that day.

He was a member of the committee that selected the design for the National Museum and Library, which opened on Kildare Street, abutting Leinster House, in 1890 and he donated a “very fine” butterfly collection from Ceylon to the Natural History Museum (the “Dead Zoo”) in Dublin. He described the National Museum and Library designs as “of remarkable beauty, in harmony with the best architecture in Dublin”.

In Galway, he built Kiltartan National School and paid for the restoration of the ancient round tower in Kilmacduagh in 1879 when it was damaged by lightning. He also donated a 17th-century oil painting of the Assumption of the Virgin Mary to the Catholic cathedral in Tuam. In London he presented two Velázquez paintings and a Jan Steen monochrome to the National Gallery, where he was a long-serving trustee. He served as governor of Ceylon (now Sri Lanka) for five years and he is remembered there for many progressive works and in an imposing 2.6 metres statue erected outside the museum in the capital, Colombo.

These and other legacies might have been forgotten had he not married a young Co Galway neighbour, Augusta Persse, in 1880, four years after his first wife died. This neighbour, who became Lady Augusta Gregory, said that her hope in editing and publishing his posthumous autobiography – her first book – was “that his name, which was known, and kindly known, in many countries beside his own, may be kept alive a little longer”.

Sir William’s bones are interred with those of his parents in the family mausoleum, close to the former Kiltartan National School (now the Kiltartan Gregory Museum), near his ancestral home at Coole Park, Gort.

A relative who recently surveyed the crumbling mausoleum in the middle of what is now a local farmer’s field remarked: “Well, he got his quarter-acre in the end.”

1 We need to pay very close attention to what is happening in Britain now
2 Gabriel Scally warns against ‘rush’ to relax Covid-19 restrictions
3 Connell losing touch with club championship is real tragedy of Normal People
4 Normal People Class of 2020: The nine college friends in the series
5 Simple restorative exercises that can improve your posture after all the sitting
Real news has value SUBSCRIBE