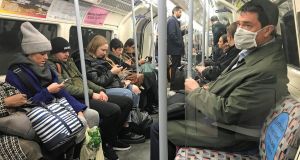 Historically, islands have advantages when dealing with epidemics. For example avoiding importation of new cases by controlling movement to and from the island is comparatively simple. However, in this coronavirus pandemic, Ireland’s geographical advantage is being squandered by the adoption of very different approaches to dealing with the disease. Potentially these differences between the North and the Republic are very serious.

Across the island, health services are making enormous efforts to treat people seriously ill with coronavirus, also known as Covid-19, while preparing for a future spike in cases. In addition, although there are differences around measures to ensure isolation of individuals and households, both the North and the Republic are now fully aware that it is crucial. However, the inconsistencies are not trivial. The advice to someone in Lifford with symptoms of the disease is to self-isolate for a minimum of 14 days – a stone’s throw away in Strabane the advice is isolation for seven days.

One difference stands out. The Republic is attempting to limit spread and terminate the outbreak as rapidly as possible. The aim is to identify people developing the disease through widespread intensive community testing. It then traces close contacts of those testing positive for the virus and ensure that both patients and contacts are isolated.

In the North, community testing and contact tracing were abandoned on March 13th and, as in the rest of the UK, testing will be largely reserved for hospital inpatients and health service staff. In the Republic with its network of over 40 community testing facilities, the aim is to reach 100,000 tests per week by the end of April, whereas the North has set a goal of performing just under 8,000 tests per week.

These very different policies get to the heart of the North-South differences. The Republic has watched and learned from the experience of countries, including South Korea and China, that have controlled the disease successfully. Also, the Government has followed advice from the key organisations in outbreak control; the World Health Organisation (WHO) and the EU’s European Centre for Disease Prevention and Control.

In contrast, the UK has ignored both experience elsewhere and the relevant international bodies. Indeed, at a recent press conference, the deputy chief medical officer for England assured journalists that WHO advice was only relevant to low- and middle-income countries. In shades of Orwell’s 1984, Whitehall does not want people learning about the views of WHO and the successful efforts to control the virus in other countries in case it undermines their novel and unevidenced approach. The UK government was told on March 4th by their “scientific advisers” that media reports of successful public health strategies in other countries could spark public concern if those interventions were not being applied in the UK.

The approach taken in the North is essentially the one promulgated from Whitehall. So far, devolved governments in Scotland and the North have shown little sign of challenging or deviating from that strategy. The unified approach held firm even when it was revealed by the small coterie of senior officials guiding policy that their actual aim was for the population to actively develop “herd immunity”. The concept roughly being that when the proportion of the population that have had the disease is high enough, then there will not be enough uninfected people left for the virus to continue to spread. It is an approach that is regarded by many senior public health physicians as dangerously flawed.

A key aim of the battle against the virus must be to gain precious time for development of an effective vaccine and for trials of antiviral drugs. There is also the hope, fingers crossed, that summer weather in the northern hemisphere might help. These are all reasons why the approach of no community testing and reliance on the development of “herd immunity” is deficient.

The political leaders in the North need, on coronavirus, to decouple themselves from the Whitehall approach

That’s bad enough, but the real problems will occur in the future phases. Lifting travel, education and work restrictions will be possible in due course, but without both effective mechanisms to detect and deal with new cases that will inevitably arise north and south, and common restrictions on travel to and from the island, we could find ourselves yet again in the midst of a mass outbreak. Two different approaches to testing and contact tracing are just not compatible with achieving the level of control needed to win the battle.

It is a big ask, but now is not the time to be captives of our histories. Lives can and should be saved. The political leaders in the North need, on this specific issue of coronavirus, to decouple themselves from the Whitehall approach. They and their counterparts in the Republic must as equals set about, with every possible urgency, harmonising their strategies and actions. The situation requires boldness of thought and deed.

1 Normal People: Full-frontal nudity was not its most radical feature
2 ‘Frustrated and angry’: Thousands march in Dublin to protest death of George Floyd
3 Should my mam wait for house prices to drop before buying?
4 Covid-19: Easing of restrictions ‘unlikely’ to be speeded-up
5 Coronavirus: One more death in Republic as expert warns house parties are ‘disaster’ for containment
Real news has value SUBSCRIBE