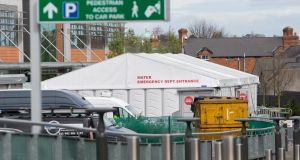 A medical tent erected at the entrance to the emergency department of the Mater hospital in Dublin. Photograph: Gareth Chaney/Collins

Remember RTÉ reporter Teresa Mannion’s broadcast during Storm Desmond in 2017? She begged us all to stay at home. That would protect ourselves but it would also protect the emergency responders, who would need to come to our rescue if we were injured.

In the same way, everyone is asked to play their part during the current threat from Covid-19. Travel and outdoor movements are restricted for everyone under 70. Restrictions are even greater for the over 70s, who are required to stay at home, avoid contact with others and arrange for delivery of food and other essentials. This is called cocooning.

While measures are in place to reduce the risk to those providing essential services, we can all contribute to that by following the advice to stay at home. That reduces our risk of catching the coronavirus, which is circulating in the community, and of passing it on to others. If we do get ill, it increases the risk to healthcare workers and reduces the capacity of the health services to care for others.

It is easy ... to understand why those taking medication which affects their immune system, such as those who have had an organ transplant, are being asked to stay at home

The benefits of physical activity are well known. Being out and about and meeting other people is good for mental health. Even for those who are older and frail for one reason or another, the mantra is to ‘get up, get dressed, get active’.

It is well documented that muscle mass goes down steadily in anyone who is confined to bed or sitting for long periods of time. Sitting is also associated with metabolic changes, which increase the risk of heart disease, stroke and other diseases.

The National Public Health Emergency Team sconsiders the downsides as well as the benefits of every recommendation they make to government. Advice to restrict movement outside the home was not made lightly but was based on the judgment that the benefits would outweigh the risks.

Why was cocooning recommended for the over 70s?

It is easy for people to understand why those taking medication which affects their immune system, such as those who have had an organ transplant, are being asked to stay at home. However, the capacity of the immune system to respond to threats such as a virus also decreases steadily as we age. This is due to a steady reduction in the number of cells in the body’s defence system to tackle and disarm invading bacteria or viruses.

Why do some people have a mild illness with Covid-19 and others end up fighting for their lives due to the infection?

Immunologists who are studying the course of the Covid-19 illness have found that several days into the illness an imbalance may develop in the immune response causing excessive inflammation. This can result in acute respiratory distress syndrome and can damage other organs such as the kidney. It is not known why this occurs in some people and not in others but it is more likely to occur in older people.

The risks are justified due to the benefits to those staying at home, to the wider public and to those providing essential services

The Irish longitudinal study on ageing, Tilda, found a high prevalence of diseases such as diabetes, chronic lung disease and heart disease. A high percentage of the over 50s are taking several medications on a daily basis. While most are feeling well, these diseases can also reduce the effectiveness of their immune system.

In addition, anyone with a condition which affects their lungs, heart or blood vessels will be less well able to cope with lower levels of oxygen if their lungs are affected by Covid-19.

So why was age 70 recommended for cocooning?

Analysis of early data, especially from Wuhan in China, can help to estimate the number of cases which may occur and to plan the health services which may be required over time.

Even though this is a new virus in humans, we know that the majority, about 80 per cent, of those affected have a mild illness. However, up to 20 per cent, are quite ill and disease severity increases with age. A study by researchers in Imperial College London found it was unusual for younger people to be hospitalised but increased to one in eight of those in their 60s and up to one in five of the over 80s.

We do not know how that level of severe illness will present in different populations with different background levels of chronic disease and different healthcare systems. What we do know is that those who are older and those with an underlying illness are at higher risk.

The decision to restrict movement and to cocoon those over 70 considered the risks due to the reduced activity and social interaction, as well the benefits from reducing transmission in older age groups. The conclusion was that the benefits of the restrictions outweighed the acknowledged risks. The risks are justified due to the benefits to those staying at home, to the wider public and to those providing essential services.

It is important to remember that the restrictions do not apply if anyone needs urgent medical help for any reason, such as a suspected heart attack, stroke or problems with diabetes. In that event, they should call 999 in the usual way. Emergency departments have made arrangements to separate patients who might have Covid-19 from those with other needs for acute care.

So, if Teresa Mannion were reporting on this, she would plead with all of us to do as we are asked and to stay at home, unless there is a good reason to go out.

To protect themselves and others, those over 70 and anyone else at high risk should comply with the requirement not to leave home. Remember, help and support is available for anyone who requests it from local services, co-ordinated by your county council.

1 Luke ‘Ming’ Flanagan bares his bottom half to European Parliament
2 Coronavirus: Eight further deaths and 10 new cases reported in the State
3 Gardaí investigate Dublin Black Lives Matter protest over Covid-19 rule breach
4 Double Standards for Men No 253: Lynn Ruane v Paul Mescal
5 Do I want things to go back to normal? I’m not so sure I do
Real news has value SUBSCRIBE