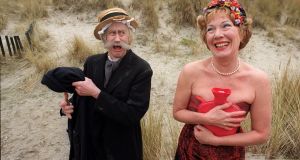 Barry McGovern as Willie and Rosaleen Linehan as Winnie in a photocall for the Gate Theatre production of Happy Days. Photograph: Alan Betson

Another heavenly day. The trouble is if you’re over 70, you can’t leave your place to savour it. You can’t go for a walk or a swim, or shop for yourself. House arrest. Cocooning. And for many that seems like a cruel accident of birth date, as if the sheer heavenliness is mocking.

“Another heavenly day” are the opening words of Beckett’s play Happy Days, and its heroine Winnie, can’t leave her place to go for a walk, or a swim or shop, She’s buried up to her waist in sand, then up to her neck. Stuck. Cocooned, you might say.

Now, Winnie is more than some “always look on the bright side of life” optimist. She is, after all, the creation of a man who knew all about the dark side. Samuel Beckett’s response to the crisis to which United Nations secretary general António Guterres likened the pandemic – the second World War – was to put his life in mortal danger in the Resistance.

We don’t know why Winnie is stuck. We just know she has some compulsion to carry on. Winnie examines life as she examines the contents of her handbag. And she talks and she talks.

Happy Days is what the literary critics call absurdist. But it doesn’t seem so absurd now. In fact, it seems like the chronicle of a pandemic foretold. We are all Winnies now, putting on our lipstick in preparation for Zoom and Facetime where we will only be seen from the waist up.

And, like her, we’re talking. We talk about who might have given Leo Varadkar the Mr Men mug. We talk about Bryan Dobson’s sartorial splendour, Ciara Kelly’s sumptuous sofa, and the nothingness of Claire Byrne’s “shed” broadcast. That nice lampshade behind Brian O’Donovan – is that in his New York apartment or is it a hotel?

We talk about the best online offerings of home gym equipment and skincare products (no looming recessions there!). We critique our unexpected preferred pandemic film choices – the bleak realism of war movies, contagion movies over romantic or feel-good (how consoling that in Ron Howard’s 1985 movie Cocoon, the ancient ones emerge rejuvenated).

We mourn the soaps which can’t make the cut over physical distancing: how long now before we know if Eastenders’ Mick Carter leaves the Queen Vic?

There is a name for that kind of talk. It’s called gossip. And this much maligned form of communication comes into its own at a time like this. There are no virtue signallers to warn against its trivialities or venalities. It keeps us in touch with one another. It always did.

Long before the internet, long before newspapers – what were Boswell, Dr Johnson and Proust but arch gossips? – it was an unquenchable force. Indeed, to paraphrase Samuel Johnson himself on London, one who is tired of gossip is tired of life.

The main charge against gossip, that it is a lower form of communication, has never really held sway. Many scandals would not have come to light were it not for word-of-mouth gossip. The stunning example is, of course, the Harvey Weinstein rapes and sexual abuse scandal.

Conversely, other shocking scandals such as clerical child sex abuse might have come to light much earlier had there been more gossip in some of the priest-ridden dioceses in Ireland. Sometimes gossip is the only way to get a truth out.

If, as the celebrated linguistic scholar Deborah Tannen says, “Each person’s life is lived in a series of conversations,” then we are living life at its most intense right now.

Because one thing a pandemic does is reveal our priorities.

A week ago, Boris Johnson’s government decreed that every homeless person and rough sleeper was to be housed for their own safety. But one group chose their canine companions over safety and stuck to the street – an extraordinary group called Street Vets got it and pet-friendly homeless accommodation is born.

Priorities tell you everything about life force and the human spirit. Fashion houses are turning their production over to making medical protective equipment – the angels wear Prada now. And food producers, suppliers and volunteers have placed themselves in the vanguard of this fight.

Which makes all the more extraordinary the action, or inaction, of some of our politicians. Government formation – stable government formation – right now, could be a matter of life and death. Yet some smaller parties, particularly Labour, are prioritising party over country.

Beckett never sat on the fence. “If you don’t know where you are currently standing, you’re dead,” declares Winnie. The lockdown will end sometime. There will be questions asked. Such as: what did you do in the pandemic.

For the hermetically sealed cocooners, who are having it hard, it will end too. But what matters right now is that it’s another heavenly day.

1 Normal People: Full-frontal nudity was not its most radical feature
2 Covid-19: Easing of restrictions ‘unlikely’ to be speeded-up
3 Trump turns to bible for photo op as DC burns around him
4 Couple injured in shooting incident at farm in Co Waterford
5 ‘Frustrated and angry’: Thousands march in Dublin to protest death of George Floyd
Real news has value SUBSCRIBE