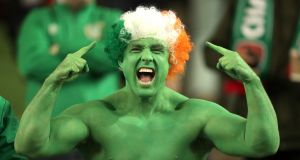 Among the consequences of Tuesday night’s 5-1 defeat to Denmark is that Irish football supporters will now be forced to take a seven-year sabbatical from attending major tournaments en masse. This may be no bad thing.

Certainly, missing out on next year’s World Cup was probably a mercy in disguise. If nothing else, a Joxer Goes to Nizhny Novgorod road trip would have burned out the engines of more than a few old vans. But I also suspect that, like the team, Irish supporters were not quite ready for Russia at this stage of their development, nor Russia for them.

One shudders to think, for example, what might have happened had the World’s Greatest Supporters (WGS) attempted to serenade Russian police in an underpass at midnight while ignoring encouragements by loudhailer to disperse peacefully.

Yes, it worked well in Bordeaux last year, where the mayor retweeted the video and was reported to have been “totalement séduit” (ravished, more or less) by the fans’ rascally charm.

In Rostov-on-Don or Yekaterinburg, however, such antics might easily get lost in translation. I fear the part of the multi-verse song that goes “Shoes off, for the (French/Russian/Secret) police” would end in tear gas.

Even assuming Irish fans were considered non-combatants by Russia’s violent football “ultras” – who, according to the Daily Mail, have been training for the tournament in “gyms, weight-rooms, and forests” – the chances of general misadventure would seem higher than usual.

And we won’t even get into the potential of local law enforcers to levy “fines” from strangers suspected of being in possession of disposable income, although that was the obsession of a Dublin taxi driver I hired recently who hoped that results would relieve thousands of Irish innocents from the obligation to travel to Russia and be robbed.

But all that aside, anyway, there have been signs of late that the WGS were experiencing a dip in form at just the wrong moment for a major tournament. As long ago as Euro 2012 in Poland, some observers had detected their descent into self-parody. Even so, measured in viral-video units – the only currency that matters these days – last year’s French campaign was a triumph.

The publicity it generated was even credited with an upsurge in French tourism here. But it also increased pressure on the WGS to find new, YouTube-friendly ways of having the “bants” – as football fans call it. And in this ever-more-competitive environment, mistakes were to be expected.

Sure enough, from last weekend’s trip to Copenhagen, the most viral video was not so much bants as pants. Apparently, one of the city’s Irish pubs was next door to a Victoria’s Secret lingerie shop. And here, some fans thought, was comedy gold waiting to be mined.

Had the target been a sheepish male, emerging to unexpected cheers, it might even have worked. Unfortunately, she wasn’t. Despite her gamely playing along, it looked like a major misjudgement by the male-dominated WGS. On Twitter replays, it was rightly adjudged an own goal.

So, for a variety of reasons, Russia 2018 might be a good tournament for Irish fans to sit out. Apart from anything else, next year marks the centenary of the deadliest epidemic in history, the Spanish Flu. Going viral in any form might be best avoided.

But then the next tournament for which we can qualify – Euro 2020 will be the first without a host country. Mirroring the atomisation of society in general, it will have 13 different host cities, including Dublin.

And after that, by contrast, it’s the 2022 World Cup in Qatar: a step too far, surely, for even the WGS.

So it may not be until Euro 2024, wherever that is, that any country again experiences the joys of invasion by up to 20,000 fun-and-beer-loving Irish supporters for a fortnight or more. But will we be missed in the meantime? Alas, I fear not.

My mind goes back to where it all began, Stuttgart 1988, when after the famous win over England – almost as popular in Germany as it was here – it first occurred to any of us that we were God’s gift to a suffering world. The suspicion went unchallenged in Hannover, which thanks to Soviet communism, we had to ourselves.

But then the circus reached Gelsenkirchen where, much as the locals loved us, we were disconcerted to be overshadowed by our immediate predecessors. The Irish were the second-best supporters in the tournament, our hosts agreed. The best, God damn them, were the Danes.

1 Dublin farmer discovers overnight rave on his land
2 Government concern over rise in Covid-19 cases in eight counties
3 Should I switch bank now with Ulster Bank at risk of closing?
4 Work to stabilise land after ‘suspected tunnelling’ behind terrace could cost €300,000
5 The Offload: Saracens prove Pro14 is not fit for purpose
Real news has value SUBSCRIBE