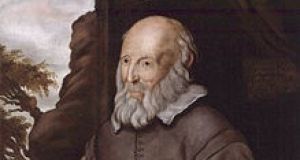 Thomas Parr: as a young centenarian, he had performed penance for an extramarital affair

On a visit to Beshoff’s, the Dublin fish-and-chip chain, last weekend, I read for the umpteenth time a piece of family-history-cum-marketing on the paper table mat. It noted that “Grandfather Ivan Beshoff” came to Ireland from Russia in 1913 “and lived to 104 years”. It added that Ivan’s father had reached the age of “108” and his grandfather “115”. Then, as usual, came the punchline: “Enough said about the goodness of fish.”

Those are certainly impressive figures, I reflected again, albeit from a small sample. One might equally note with concern the negative trend: a catastrophic 10 per cent decline in Beshoff longevity in the space of three generations. But joking aside, and with all due respect to fish, I would want to know more about the rest of the patriarchs’ lifestyle before committing myself to an ichthyophagous diet.

In any case, it was amusing to learn soon afterwards that only one of the aforementioned trio would have qualified for inclusion in a major new study of longevity, about which Monday’s New York Times had a fascinating feature. The focus of this latest research is “supercentenarians” – people aged 110 and up.

There are thought to be not more than 1,000 alive anywhere, although only 150 are known. In recent years a “citizen-scientist” called James Clement has secured DNA donations from “some three dozen” of these. Their genomes have since been sequenced and he is now “crowdsourcing” the results, making them available to any researchers who think they could mine the information for lessons useful to humanity.

The big question is whether supercentenarians are merely the winners of multiple “hereditary coin tosses” that, combined, give them the genetic equivalent of tonight’s lottery numbers, or whether they benefit from something more particular that might in time be used to help others enjoy long and healthy lives.

That’s a common factor in those studied, by the way. Not only do they reach very old age, they also avoid serious illness, physical or mental, until the end. Being female also seems to help, although the NYT otherwise reported a wide variation in factors to which they attributed their good fortune. “Morning walks and chocolate,” one woman said. “Raw eggs, and no husband,” said another. As for Clarence Matthews, the oldest man in the US when taking part in the project, his only lifestyle advice was to “keep breathing”. He finally stopped doing so himself last July, aged 111.

In defence of husbands, I should remind readers that when the then oldest Irish woman, Kathleen Snavely, a Clare-born US emigrant, died in 2015, it was noted she had had two husbands in her time. They were among the reasons credited for keeping her alive until the age of 113.

But even that was far from making her the oldest recorded Irish person. If we discount mythology, the leading claimant may be Martha Hanna, from Co Antrim, who died in 1808. Longevity aside, the other characteristic attributed to Hanna was dwarfism: she was said to be only 4 feet 7. But she more than compensated with her lifespan, reputedly 126 years.

Among her claimed memories was the sound of gunfire at Dungannon in 1690.

Even her epic span pales, however, alongside that attributed to Thomas Parr, an Englishman of the 15th to 17th centuries, inclusive. At an age when Martha Hanna was preparing for the next world, if his own accounts are believed, Parr was still enjoying an active sex life. As a young centenarian, he had performed penance for an extramarital affair in which he fathered a child. When his first wife died years later, he did the decent thing, aged 122, by marrying the mother.

“Old Parr” would in time earn a mention in Bram Stoker’s Dracula and on page one of Finnegans Wake. But even in his lifetime he was famous enough to be painted by Rubens and to be presented to King Charles I. Alas, exchanging the air of Shropshire for London seems to have done for him. While in the capital, he also achieved the less desirable distinction of being the subject of a postmortem by William Harvey. Harvey was impressed at, among other things, the condition of Parr’s genitalia, which he found consistent with reports of their usage.

Mind you, at least one latter-day scholar has reinterpreted the postmortem findings to mean the old man could not have been half his supposed 152 years. A gravestone in Westminster Abbey nevertheless records that Parr was born in 1483, lived through “ye reigns of ten princes”, and was buried on this date – November 15th – 1635.