Where now for Irish soccer? 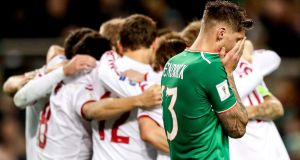 Sir, – The customary tin of Danish butter cookies has been removed from my Christmas shopping list. – Yours, etc,

Sir, – It was sobering to watch Denmark’s defenestration of the “Boys in Green” on Tuesday night. It was even more sobering to watch the self-styled “greatest fans in the world” turn their backs on the team and walk away. – Yours, etc, JOHN NAUGHTON,

Sir, – Is there anything to be said for a mini-tournament next June, with the Republic of Ireland, Northern Ireland, Scotland and Wales?

Holland, Italy and the United States could join too! – Yours, etc,

Sir, – I objected previously to Martin O’Neill getting an extension to his Ireland gig. The Denmark result vindicates my poor opinion. He appears to bring nothing to the team bar jumping up and down on the touchline. – Yours, etc,

Sir, – The exit from 2018 World Cup participation was less a case of the customary “blood and thunder” and more a case of “thud and blunder”.

The case for an all-island team was never more pointed. What’s the value in the perennial tawdry struggle though the dreary qualifiers only to fade and dwindle before the actual tournament kicks off?

With a combined population of almost 6.5 million people, we would still be in the minion zone compared to the “big boys”, but at least we could compete meaningfully with all comers. – Is mise,

1 Aer Lingus staff say they are living in ‘near poverty’ and unable to cover rent
2 Brendan Gleeson as Donald Trump: ‘A mediocre impression and possibly a great performance’
3 Coronavirus: Warning of similar measures for other counties as Donegal moves to Level 3
4 Dr Martin Feeley: Young and healthy majority need to be allowed to live
5 Two turnkey homes for sale on same street as owners leave Dublin
Real news has value SUBSCRIBE