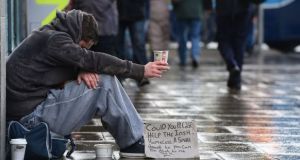 Sir, – The view that volunteers distributing food and clothing to the homeless are “not helping” (News, November 15th) brought to mind an aphorism I’ve heard in business, as much as in medicine: to survive in the long term, the first thing you need to do is survive in the short term. These exchanges of goodwill may not be a real solution – but they may allow time for solutions to be found for vulnerable individuals. – Yours, etc,

Sir, – The director of the Dublin region homeless executive, Eileen Gleeson, told Dublin City Council’s policing committee that homeless people are on the street due to an accumulation of their “bad behaviour” and that volunteers feeding the homeless only encourages them to remain on the streets.

Blaming homeless people for their socially unacceptable situation as a result of their years of “bad behaviour” brings us back to Victorian times, when moral failings rather than immoral social conditions were attributed to marginalised people for their social situation and when the view prevailed that any charity giving food or any support to alleviate their chronic lives would only encourage their idleness and homelessness.

These insensitive remarks act as a smokescreen to cover the continued failure of the Dublin Region Homeless Executive and the Government in providing homes for children and adults evicted from their homes due to greedy landlords and vulture capitalists, and for those rough sleepers on the streets of Dublin, who are there not as a punishment for their “bad behaviour” but largely due to family dysfunction. – Yours, etc,

Sir, – If years of “bad behaviour” are the cause of a person becoming homeless, why are all the corrupt bankers, politicians and clergy not lying in sleeping bags on our streets? The volunteers on our streets are performing a life-or-death intervention in many cases. We should all thank them so much. – Yours, etc,

A chara, – In fairness to the Taoiseach, while he did say that the State has a comparably lower level of homelessness than other countries, he added immediately that this was nevertheless still unacceptable.

His remarks have at least highlighted the significant element in the ongoing debates around this serious social issue – that there are several definitions of “homelessness” being used by national and international agencies, and that is not only unacceptable, but also ludicrous. The endless debates broadcast and reported in our media are rendered meaningless by the failure to challenge politicians, health officials and NGO sector spokespeople to define what cohorts they speak of when discussing our own Irish homeless. The result is often a confused argument of political pointscoring.

This is more than a mere academic point, since quantifying the numbers who are at risk through being homeless should inform the strategies needed to tackle such chronic problems.

Minister for Health Simon Harris, for example, talks about hospital waiting lists and the chronic issues regarding our emergency departments without apparently being aware that a disproportionate number of homeless rough sleepers account for up to 10 per cent of people attending emergency departments in our city hospitals. These same unfortunate cohorts of homeless not only use our hospitals as safe shelter, but also consume valuable nursing time on regular admittance and readmittance throughout the year. As Elaine Edwards stated in her article “Homeless figures depend on definitions” (Analysis, November 14th), contradictory definitions are a significant problem.

The fact that so many State agencies, consuming huge public funding, are unable to agree on standardised definitions for those who are homeless is a scandal. – Is mise,

They have no choice. Those sleeping in doorways must move on to let businesses operate; those in shelters have to depart to let their overstretched staffs start the long process of preparing for the next influx that evening; those in cars have to move on before they are clamped or ticketed; and families in B&Bs, hostels, and the like have to get on the road very early indeed to make the long journey back to the communities in which they once had a home and their children still attend school.

Words to the effect that other countries have a bigger problem with this issue may be comforting to Mr Varadkar but they are of no comfort at all to those without a place to call their own. Indeed, such words make it difficult to believe that he cares much about this class of early risers at all. – Is mise,

Sir, – Our Taoiseach says homelessness is not high in comparison to international standards. Unlike his salary. – Yours, etc,

Sir, – So Ireland’s homeless crisis is not the worst in Europe. Is this the low our Government is settling for? – Yours, etc,

1 Mike Murphy: ‘I won’t do another over-70s lockdown’
2 Blanchardstown, Tallaght top table for highest Covid-19 rates
3 The far right rises: Its growth as a political force in Ireland
4 Coronavirus: Public health experts considered moving Dublin to Level 4
5 Prof Sam McConkey: This is the beginning of the second Covid-19 wave in Ireland
Real news has value SUBSCRIBE