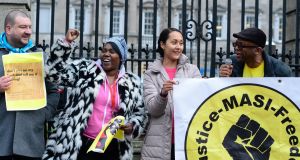 About 3,000 people face a wait of about a year and a half for a decision on their asylum claim. Photograph: Cyril Byrne / The Irish Times

The court drew a link between work and “the dignity and freedom of the individual” which the Constitution seeks to promote. The court rooted its judgment in the principle that protecting the dignity and freedom of the individual is an obligation on the State which arises by virtue of our common humanity: it is not dependent on a person’s citizenship or status in Ireland.

In the context of the ongoing humanitarian crisis in Europe created by our treatment of refugees and the harrowing situation at the US border where children are systematically separated from their parents, the court’s statement is profoundly important. Too often, people seeking asylum are dehumanised, separated from communities, and treated as suspect and “other”. The court’s judgment emphasises that when a right affects our human personality, the Constitution holds us equal before the law, regardless of legal status.

A year on from this seminal judgment, it’s important to reflect on where we are now, particularly in the context of World Refugee Week. Despite the court’s decision, the right to work remains elusive for people seeking asylum in Ireland. About 3,000 people face a wait of about a year and a half for a decision on their asylum claim.

The Government has committed to opting into the EU Reception Conditions Directive which requires member states to provide effective access to the labour market. The process is under way but, in the meantime, many people are unable to vindicate their constitutional right. The Government’s interim scheme, in place until the directive comes into effect, channels applications via the Department of Business’ employment permit system. This is not working.

Figures from May, a year on from the Supreme Court’s decision, stated that no application for a work permit has been successful. About 370 people had successfully applied for the more precarious self-employment status.

For many people, the strict requirements of the work permit system – to earn more than €30,000 a year, pay an expensive administrative fee and exclusion from a long list of professions – mean that they are not even eligible to apply. The Irish Refugee Council has worked with people who, remarkably, have satisfied these requirements yet cannot make an application due to particular problems in the application process. One example is the requirement to hold a valid passport which many people in the asylum process simply do not have.

Last week, the Movement of Asylum Seekers Ireland launched their right to work campaign. Direct and powerful testimony from people in the asylum process described the long-term impact of not being allowed to work and the difficulties with the interim scheme.

The Irish Refugee Council has advocated for the right to work to be immediately given to people who have waited six months for a decision and that there be no restrictions as to the profession they can pursue. It is unclear if this will be reflected in the final arrangement when Ireland opts into the Reception Conditions Directive. Unfortunately there has been little meaningful engagement between the State and civil society organisations, or protection applicants themselves.

As the directive will be implemented by Statutory Instrument, not primary legislation, Oireachtas scrutiny has been non-existent. Fianna Fáil Justice Spokesperson, Jim O’Callaghan TD, commenting on the implementation of the directive at the Oireachtas Justice Committee compared it to asking people to talk about a football match they have not seen.

Providing people with the right to work brings Ireland into line with other European countries. The Government justification for the absolute ban on access to the labour market in Ireland has been that it will create a pull factor, increasing the numbers of people applying for asylum in Ireland. Emily Logan, of the Irish Human Rights and Equality Commission, recently told the Justice Committee that this was not correct and pointed out that research has found no direct long-term connection between the right to work and people seeking asylum in a particular country.

We are a compassionate, fair people. We are also a country of emigrants and refugees. The world has offered generations of Irish people a fresh start. But we will only be a truly compassionate country when we end the hypocrisy at the heart of our asylum policies.

This World Refugee Week, the Irish Refugee Council is calling for an effective right to work that will end the cycle of dependency that our current asylum system propagates. It’s time we faced up to this burning political issue on behalf of those who don’t have a vote and work to create a fair and just asylum system in Ireland – something closer to a true republic of opportunity for all.