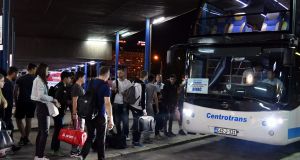 Migrants board a night bus at Sarajevo station, on their way to the Bosnian town of Bihac on June 7th, 2018. Photograph: Elvis Barukcic/AFP/Getty

The Red Cross says thousands of people now trying to cross the Balkans to the European Union are in “desperate need” of more assistance, amid growing concern over how the region will cope with a new surge in migration pressure.

Bosnia is under the biggest strain, having registered about 6,500 migrants this year compared to just 755 in 2017. They are arriving along a new “Balkan route” through Greece, Albania and Montenegro, and try to continue to EU member Croatia; some migrants also enter Bosnia from Serbia, where thousands have been stuck for many months.

“Thousands of people making their way through the Balkans are in desperate need of basic humanitarian services and support,” the International Federation of Red Cross and Red Crescent Societies (IFRC) said on Monday.

“We are concerned that people are not receiving the assistance they need. People are keen to keep moving and are reluctant to access state services for fear of being detained,” said Simon Missiri, regional director for Europe for the IFRC, which comprises 190 national Red Cross and Red Crescent societies worldwide.

“Red Cross societies in the Balkans are doing what they can to reach and help people migrating through their territories, but the scale and complexity of this operation is such that more assistance is needed,” he added.

The EU this month pledged €1.5 million to help Bosnia cope with an influx of migrants that has seen many sleeping rough in the capital Sarajevo, in Velika Kladusa on the border with Croatia and in other towns and cities.

Police on Monday stopped a group of about 100 people as they tried to cross into Croatia near Velika Kladusa, where last Friday a Moroccan man was reportedly killed in a knife fight between migrants.

The states on the new Balkan route fear a repeat of the kind of poor co-ordination and ad hoc measures that compounded the 2015 migration crisis, the political and social effects of which still resonate across Europe today.

Fresh discord in Germany over its asylum policy and the hard-line positions of Italy, Austria and much of central Europe are also stoking Balkan concerns that the region could effectively become a dumping ground for people the EU does not want.

Austria’s police and military forces plan a major border protection exercise later this month, and its media report that the government is holding talks with Balkan states over the possibility that they could host camps for people who stand no chance of gaining asylum in the EU.

Officials in Bosnia warn that it will seal its borders with Serbia and Montenegro if Austria and Slovenia close their southern borders, raising the prospect of a potentially chaotic domino effect rippling south through the region.