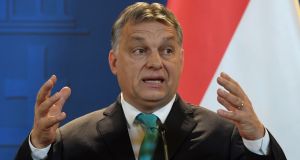 Hungary is poised to pass a law on Wednesday to allow the imprisonment of people who help illegal migrants, ignoring criticism from the European Union, the UN refugee agency and NGOs, and a late plea from a major democracy watchdog.

On World Refugee Day, parliament is due to vote on the so-called Stop Soros Bill, which is named after George Soros, a liberal philanthropist whom Hungarian leader Viktor Orban accuses of plotting to overwhelm the EU with Muslim migrants.

Mr Orban’s government enjoys a two-thirds majority and will easily pass the Bill unless it heeds a call for postponement of the vote from the Venice Commission, which advises the Council of Europe on legal and constitutional matters.

The commission said its president Gianni Buquicchio had “called on the Hungarian parliament not to proceed with the adoption of the law prior to the publication of the commission’s opinion this coming Friday”.

If parliament refused to wait, Mr Buquicchio asked it “at least to take into account the commission’s recommendations as they appear in the draft opinion which has already been sent to the authorities” in Budapest.

The Bill states that “those who provide financial means . . . or conduct this organisational activity [for illegal immigration] on a regular basis will be punishable with up to one year in prison”.

The proposals also seek to forbid people who enter Hungary from another country that is deemed safe from gaining asylum – making it all but impossible for anyone, even those fleeing a war zone like Syria, from receiving refugee protection.

On Tuesday, Hungarian officials also announced plans to impose a special 25 per cent tax on NGOs that help migrants. Details were not immediately available.

The UN refugee agency (UNHCR) has warned that the Stop Soros Bill “would deprive people who are forced to flee their homes of critical aid and services, and further inflame tense public discourse and rising xenophobic attitudes”.

Mr Orban refuses to bend, however, and insists his landslide re-election in April gives him a mandate to fight what he calls the threat from Muslim migrants to Europe’s security and traditional culture and identity.

He has also ignored complaints from some sections of the European People’s Party – which includes Fine Gael – and seems sure that the group will not expel his Fidesz party before next year’s European Parliament election.

During a deeply negative national election campaign in which he focussed almost entirely on the supposed threat posed by migrants, Mr Orban vowed to “take moral, legal and political revenge” on his critics after the ballot.

Two major opposition publications have since closed, and the pro-government Figyelo magazine printed a list of more than 200 Hungarian NGO staff, academics and journalists whom it called “Soros mercenaries”.

“Our administrative staff, who share our values but are not looking for public attention, were really shaken by that,” Stefania Kapronczay, executive director of the Hungarian Civil Liberties Union, said of the Figyelo list.

“For our names to be listed and printed brings back really bad lessons from history.”

Julia Ivan, director of Amnesty International in Hungary, said three of four new interns at the group quit recently because they feared the stigma of “working with organisations that are listed as enemies of state or Soros mercenaries”.

“The ‘magic’ of the draft law is that it’s so vague that you don’t know how it will be applied and who will be caught in it,” she added.

“We could be caught because we have a network of activists and volunteers . . . The government is trying to target the very ethos of human rights work and the ethos of solidarity itself.”

Ms Kapronczay said the Bill would “have a chilling effect on activism”.

“It sends a message that if you want to help [migrants] you could get into trouble. The challenge for us is to get across the message that [helping] is the right thing to do – and that if lots of people are involved, the state won’t prosecute.”