Richard Wolffe: The president of the United States is now a neo-Nazi sympathiser

Donald Trump’s press conference was a grotesque display of empathy for violent racists. At least it united the Republicans in disgust at their president 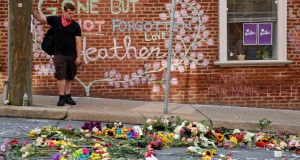 Jason Charter, of Washington stands at the site where Heather Heyer was killed during a white nationalist rally, Wednesday, Aug. 16, 2017, in Charlottesville, Va. Charter was at the scene when a car rammed into a crowd of people protesting the rally. (AP Photo/Evan Vucci)

An immensely fractured country – riven by race, class, culture and politics – finds itself transfixed by one grotesque display of empathy for violent racists. These are the same violent racists whom White House aides previously called, in remarks that Trump read out loudly and very carefully: “criminals and thugs.”

But that was so Monday. One short day later, the leader of the nation – that daily proclaims its commitment to liberty and justice for all – declared there were “very fine people” in Charlottesville, who simply joined a neo-Nazi rally to protest about a statue.

“You had a lot of people in that group that were there to innocently protest, and very legally protest – because I don’t know if you know, they had a permit,” Trump helpfully explained to the astonished press corps at Trump Tower. “The other group didn’t have a permit. So I only tell you this: there are two sides to a story.”

Sadly for Trump, there is only one side to the political reaction to his comments: sheer disgust. As an apologist for racist protestors – even though they obtained a precious permit – Trump has magically created a sense of spine in his own Republican party.

This is something of a biological miracle because people like Marco Rubio, his vanquished former rival – the man he used to deride as little Marco – was previously classified by entomologists as an invertebrate.

“Mr President, you can’t allow #WhiteSupremacists to share only part of blame. They support idea which cost nation & world so much pain,” tweeted the Florida senator. “The #WhiteSupremacy groups will see being assigned only 50% of blame as a win. We can not allow this old evil to be resurrected.”

Even in the abbreviated hashtag world of tweets, this counts for something. No doubt, Rubio will return to his spineless state when the next vote comes around. No doubt, he and his fellow Republicans in Washington will later excuse the abuse of a nation as the drunken talk of an otherwise good-hearted man.

But at this moment of testing, there is no excuse for standing on the sidelines in silence. Those who speak out deserve some praise for doing the right thing, if only to remember what the right thing looks like next month, when Congress returns.

So mazeltov to Paul Ryan for siding against the anti-Semites like this: “We must be clear. White supremacy is repulsive. This bigotry is counter to all this country stands for. There can be no moral ambiguity.”

Of course this country also stands for the statues of Confederate generals. In fact, those statues were themselves erected in a concerted effort to resurrect the old evil that Rubio describes.

There’s a reason why so many of them rose up in the 1920s, a generation or more after the Civil War. This was the era when the KKK was reborn, thanks in no small part to the new media of its day: specifically, the moving picture known as The Birth of a Nation.

Those statues were the larger-than-life resurrection of the dead and defeated Confederacy at a time when lynchings were the strange fruit of the south, and the civil rights struggle was led by a relatively new group known as the NAACP.

Those Confederate statues had nothing to do with the statues erected to commemorate the slave-owning founding fathers, as Trump argued on Tuesday.

“So this week it’s Robert E Lee, ” complained Trump. “I noticed that Stonewall Jackson is coming down. I wonder, is it George Washington next week? And is it Thomas Jefferson the week after? You know, you really do have to ask yourself, where does it stop?”

There is no finer expression of the white supremacist mindset than this kind of cultural defense. The so-called citizens’ councils of the 1950s also argued they were just trying to protect their culture from sliding down the slippery slope of civil rights, integrated schools, voting rights and economic opportunity for minorities.

What drives Donald Trump to such extremes? Yes, we know he has a long history of racism: from his belief in the guilt of the Central Park Five to his announcement speech riff about Mexican immigrants as rapists. Yes, we know Ivana Trump said he kept a copy of Hitler’s speeches by his bedside.

But it would be an omission to leave out the driving force of his candidacy and his presidency: his visceral hatred of Barack Obama. Trump has no clear ideology and no clear purpose to his presidency, other than his obsession with overturning everything Obama stood for. His presidential campaign began with a racist lie about Obama’s birth certificate; his presidency continues to smolder with resentment about the enduring life of Obamacare.

As they say on Scandal, and in too many American homes for too long, you have to be twice as good as them to get half of what they have. How it must pain Donald Trump to know that his predecessor was twice as good at everything from inauguration crowds to legislative victories.

Let’s be honest. Trump’s sympathy for neo-Nazis is no more shocking than his pussy-grabbing boasts, his continued profiting from the presidency, his coddling of (and alleged collusion with) the Russians and his obvious obstruction of justice by firing the FBI director.

There is, amid all the random tweets and undisciplined press comments, a remarkable consistency to Donald Trump. He is the very man Hillary Clinton warned us that he would be.

Perhaps the civil rights movement itself holds some lessons of what lies ahead: the moment of most violent white-lash is the moment when civil rights takes its biggest steps forward.

When James Meredith enrolled as the first black student at the segregated University of Mississippi in 1962, there were riots from a white mob, quelled only by federal troops. After a year of studies, racial harassment and protection by US marshals, Meredith graduated in a peaceful commencement ceremony.

Four decades later, Meredith returned to see his son graduate with the top honors from the business school at Ole Miss. He said he was far more proud of his son than he was of his own time there.

For his part in changing its culture and its history, the university made an important statement about Meredith, the man it had so roundly abused: it installed a statue of him striding towards its entrance.

Richard Wolffe is a Guardian US columnist, as well as chief digital and marketing officer at Global Citizen

3 Murmuration of starlings: How our stunning front-page photograph was taken