Brian Boyd: Tourists seen as terrorists by some in Barcelona 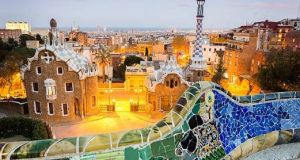 Barcelona is one of the most visited cities in Europe. A number of residents find they can earn five times as much a year by renting their apartment to platforms such as Airbnb as opposed to charging €1,000 a month in rent to the local population. Photograph: Getty Images

The children on the tour bus thought they were being attacked by Isis and started crying. Men clad in black masks held up the bus outside the Camp Nou football stadium in Barcelona, slashed its tyres and sprayed anti-tourist slogans on its windscreen.

Elsewhere in the city this August, the public bikes popular with tourists as a cheap and environmentally friendly way to get around the city have had their tyres slashed. Hotels in the city have been paint-bombed, and graffiti has appeared on walls – “All tourists are bastards” and “Why is it called tourist season when we can’t shoot them?”

What’s different about these acts of vandalism is that they are being encouraged by a political party, the “anti-capitalist” CUP party, which is at the very seat of power in the Catalan parliament. CUP, through a confidence and supply agreement, prop up the centre-right ruling party.

Tourism in Barcelona is “pure economic violence”, the CUP MP Mireia Boya said this week. Defending the slashing of tyres – which was carried out by members of CUP’s youth wing, known as Arran – she added “we are constantly asked to repudiate violence when the violence is provoked by the Catalan government”.

A spokesperson for Arran says they slashed the tyres of the tour buses and public bicycles as “acts of self-defence” in response to “the terrorism” of the tourist industry. Arran warn more direct action will be taken.

As the only substantial bulwark against the fascist dictatorship of General Franco, Barcelona has a long and proud history of electing communist, syndicalist and anarchist political representatives. A history that has never included terrifying young children and slashing public bicycle tyres.

Barcelona is one of the most visited cities in Europe. A number of residents find they can earn five times as much a year by renting their apartment to platforms such as Airbnb as opposed to charging €1,000 a month in rent to the local population. This and a number of other problems associated with high tourist numbers (rising restaurant and bar prices, the tourist tat-ification of some of the city’s historic thoroughfares etc) have led to tension.

Arran’s public statement to the BBC that “we are anti-capitalist and we want to destroy the system, and the tourist industry is part of that system” is self-explanatory. And helpful to know before you go to the trouble of buying a puncture repair kit.

Barcelona would be the Dublin 6 dinner party fashionable metropolitan destination of choice. Who among us hasn’t been bored to near death by tales of a charming cervecería found in Barri Gòtic, rapturous talk of Gaudí’s overrated Gothic Disneyland piles or an indier-than-thou music festival down by the seafront.

The city aggressively sells itself (courtesy of a multimillion euro promotional budget) as a “prime destination” for travellers interested in “architecture, design, culture and gastronomy”. And good luck finding any of those on the gaudy hellhole that is Las Ramblas.

But the inconvenient truth here for the tyre-slashing warriors of the CUP party and its youth wing is that the majority of tourists who go to Barcelona are of the non-package variety. The money they spend stays mainly in the local economy.

If Arran/CUP want to get handy with their black masks and their penknives it would make a whole lot more ideological sense to take the train up north of Barcelona to the Costa Brava or south to the Costa Dorada. Crammed on these beaches you’ll find the package or all-in tourists. The people who pay the travel agency in their home northern European country for their holiday, with the result that the profits are expatriated.

But then slashing the tyres of the “bourgeoisie” (as Arran refer to the tourists in Barcelona) makes for a better photo-op.

CUP, incidentally, is a fervently nationalist party which wants to pull an independent Catalonia out of the EU and the euro zone.

Arran have now expanded its protests outside Barcelona. Last week it attacked a restaurant in Palma on the Catalan speaking island of Mallorca. Protest graffiti in Palma reads “Tourist: You Are The Terrorist.” But a 20-minute drive south of the locally-run and locally-staffed restaurant in Palma which was attacked lies the resort of Magaluf – where many of the bars are owned by foreigners.

A group in the Basque Country acting in solidarity with CUP/Arran is now replicating the vandalism tactics on Spain’s northern coast. The beautiful city of San Sebastián has become a global gastronomic capital and as such has become a “bourgeoisie-magnet”.

They claim the Camino footfall is causing rent rises and more expensive food and wine. A lot of the Camino walkers were just 'smelly hipsters' they threw in for good measure

“Turismophobia” is now a much debated word in a country that relies heavily on the tourist trade for its GDP – in Barcelona alone tourist revenue accounts for over 20 percent of GDP. When the disturbing slogan “Tourismus Macht Frei” was painted in Gaudí’s Park Güell last May, it prompted city authorities to upgrade “turismophobia” to plain old xenophobia.

Monty Python famously had it that “no one expects the Spanish Inquisition” – and no one in Spain expects where turismophobia will strike next.

But it’s there in the most unlikeliest of places. The many Irish who walk the Camino de Santiago each year are “fornicating hipsters” when viewed through the prism of turismophobia.

In the city of Logroño – through which the Camino passes – locals took to the streets in protest last month holding placards which read “Pilgrims Go Home” and “Cheaper Wine Now”. They claim the Camino footfall in their city is causing rent rises and more expensive food and wine. A lot of the Camino walkers were just “smelly hipsters” they threw in for good measure.

In Logroño, though, the touristphobics aren’t quite as possessed with the same anti-capitalist fervour as our puncture-causing warriors in Barcelona. As one protester told the country’s El País newspaper: “the most serious aspect of the Camino is that it is a Christian tradition but many of the pilgrims are non-believers and they engage in sexual relations along the way”.

First they came for our bikes, then our sex lives. España – Por favor!

1 A Russian cruiser with ‘cannibal rats’: What other ‘ghost ships’ could be out there?
2 UK to close borders to non-English speakers and unskilled workers
3 New Sinn Féin TD apologises for ‘glib, off-the-cuff tweets’
4 Jump in young Irish adults living with parents among highest in EU
5 Just 8,000 houses built last year offered for sale on open market, says CIF
Real news has value SUBSCRIBE