Taoiseach outspoken on gay rights, but strangely silent on abortion and immigration 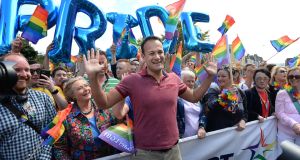 And she was right. Ireland has come a long way even since she stood on stage of the Abbey Theatre in 2015 and came close to tears as she delivered an impassioned address describing how hurtful, even demeaning it was to be jeered at or insulted while standing at traffic lights, either because she was a drag artist or, in her “natural” persona, a gay man whose name is Rory O’Neill.

Further, she said, drag is “inherently political”: it is giving two fingers to convention. And there are those who would say that the now-almost universal acceptance of gays and their culture as a valid part of our society’s make-up is equally a statement of where we stand politically. It allows us to believe that Ireland is at last an open and progressive society. After all, we have a gay Taoiseach, one of the few openly homosexual prime ministers in the western world. And by heavens aren’t the political establishment peddling that, including, sadly, the Taoiseach himself?

The advent of Leo Varadkar as the head of the Irish Government (so far unconfirmed as the choice of the people at large) has other interesting features within his personality and DNA. It has been widely noted outside this country that he is what the politically correct call a “man of colour”, that is, of mixed white Irish and Indian parentage. And his father was an immigrant, although not the kind of immigrant objected to by middle Ireland. Leo Varadkar did not attend school from direct provision: his father was and is a professional man.

Mixed views Leo Varadkar himself hasn’t trumpeted this aspect of his background particularly loudly. But then, Ireland has very mixed views on immigration: it’s not wild, as

Panti would say, how accepting of immigrants Ireland has become. There is still a more than sizeable percentage of the population which considers liberalisation of our citizenship laws would see us “overrun”, with our culture (of which religion is still the major part) “ swamped”.

Leo Varadkar, prepared to stand up for what he believes in, ie his right to be himself, has little to fear from his open homosexuality in today’s Ireland. But on more contentious issues he is remarkably reticent.

When he made his first visit to Northern Ireland as Taoiseach earlier this month, it was to make a speech concerning the problems the island will face as a result of Brexit. He took the opportunity to support Pride by attending the breakfast held prior to the Belfast Pride Parade. It was important to him, understandably, since he is gay, and gay rights are not universally endorsed in Northern Ireland. Arlene Foster leads a party which is implacably opposed to the legalisation of gay marriage. It is one of the issues which caused problems in the negotiations which led to the support agreement with Theresa May’s government.

But Varadkar told a news conference in Belfast it is “only a matter of time” before gay marriage is legalised in Northern Ireland, although he also said he was not in Belfast “to unsettle anyone”. It is safe to assume, however, that he seriously unsettled Foster and her DUP colleagues. He was not nearly so ready to unsettle them when he was confronted with a group of students from Queen’s University wearing “Repeal” T-shirts, who were looking for support for changes in the law against abortion in Northern Ireland, as well as repeal of the Eighth Amendment down here.

He kicked for touch on that one, possibly in order not to be seen to offend DUP sensibilities, as they also oppose liberalisation of the strict abortion laws in Northern Ireland – one of the few things on which they are in accord with Catholic Church authorities. Or was there another reason? Varadkar has nothing to lose on gay rights, but a lot, potentially, to lose in supporting pro-choice women in their fight for reproductive rights.

During the campaign for the leadership of Fine Gael earlier this year, Simon Coveney at least had the courage and principle to confirm that he was unhappy with the recommendation by the Citizens’ Assembly that termination should be available freely up to twelve weeks into a pregnancy. Leo Varadkar, then minister for social protection, and a former minister for health, refused to commit himself one way or another. But he has nonetheless shown how his personal wind blows: at a conference in UCD last year, he took issue with the use of the word “foetus”. It was, he said, not a word which should be used to describe a form of human life.

Returning to Panti at Edinburgh last week, she said in her speech that “everything you put on stage becomes a statement”. She was talking about even pitifully bad drag acts by youngsters “who never had a political thought in [HER)]life” but was actually saying “f**k you and your expectation” (about how I should present myself.)

Leo Varadkar has been “on stage” since becoming Taoiseach. He has been prepared to fly in the face of what is still considered convention in areas of life which affect him personally, it seems; however, he is a lot less forthcoming in other areas where Ireland still flies in the face of international norms on civil and human rights. In Panti’s terminology, he might be seen to be saying, “f**k you and your expectation.”

Emer O’Kelly is a journalist and critic

1 Bank leaked my loan request to family who tried to rip me off
2 Spread of coronavirus triggers European travel curbs
3 Why Sinn Féin will not call the State by its name
4 What evidence is there that the IRA still controls Sinn Féin?
5 Brazilian father to be deported days after daughter’s birthday
Real news has value SUBSCRIBE