With huge questions remaining about how Brexit might happen, there is a clear need for the Government to keep the Border question central to this 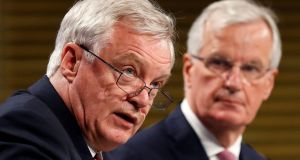 The UK’s Secretary of State for Exiting the European Union, David Davis, and the EU’s chief Brexit negotiator, Michel Barnier. The Government in Dublin will welcome that London is finally starting to put some suggestions and options on the table, even if they are still lacking in detail. Photograph: Francois Lenoir/Reuters

The horrendous complexity and challenge of negotiating Brexit is slowly starting to become clear. The British position paper on future customs arrangements, published yesterday, and today’s paper on the Border and the North, cover issues vital to Ireland. The Government in Dublin will welcome the fact that London is finally starting to put some suggestions and options on the table, even if they are still lacking in detail and a way forward is far from clear.

Issues relating to Ireland are one of three topics on which progress is meant to be made before the talks move on to future trade arrangements between the UK and the EU. As such, the weeks ahead will be important for Ireland and the Government will, before an EU summit in October, have to decide whether it feels sufficient progress has been made on the Irish issues.

Today’s paper is expected to propose that the ability to move and work freely between Ireland and the UK broadly continues after Brexit. This is important, particularly recognising the deep social and economic links that have built up over many years. It also means free movement of people can continue across the Border.

There are also other Irish-specific issues to be negotiated, some springing from the Belfast Agreement, which was negotiated in the context of both countries being part of the EU. Nothing is more sensitive, politically, than the future of the Border itself.

The British paper on new customs arrangements recognises that the reimposition of a Border on the island would be a key consequence if it leaves the EU customs union, the arrangement which allows goods to flow freely. It does suggest that this might be avoided, or at least mitigated, if the UK and the EU agreed a new customs union deal to apply after Brexit, though there are clear difficulties to negotiating such an agreement on the terms suggested by London. In particular, the EU will be highly sceptical of London’s attempts to negotiate a customs union while still trying to retain the flexibility of negotiating new deals with third countries.

If a new customs deal is not possible, Britain says, arrangements can be put in place to make the Border as “ seamless and frictionless” as possible. It also suggests that other, unspecified steps “may be necessary.” However, checks, controls and documentation would still be needed and what the Taoiseach called an “ economic border” would be in place. The Government has decided not to engage in technical discussions on how this might operate, fearing that doing so would concede that the Border is coming back. With so much still in play, this seems a sensible approach.With huge questions remaining about how Brexit might happen, there is still a lot of talking ahead, and a clear need for the Government to keep the Border question central to this.