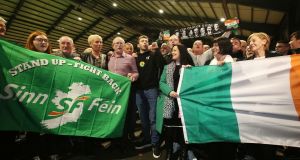 Maybe it would be profitable to think of a Fianna Fáil and Sinn Féin coalition as a single ruling government party, with a right wing and a left wing acting as a balance and control to each other. Photograph: Sam Boal/Rollingnews.ie 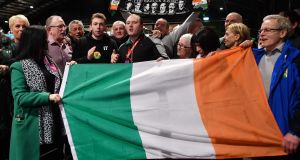 Sinn Féin party supporters sing as they hold a flag during the Dublin City count in the RDS centre in Dublin. Photograph: Ben Stansa/AFP/Getty

Walking around the streets of my Dublin neighbourhood on Saturday, as the nation’s votes were being counted, I saw something I had never seen before: in some houses, tricolours were being displayed, discreetly in upstairs bedroom windows, or not so discreetly.

This is not the kind of neighbourhood where tricolours are unfurled before the Republic of Ireland plays a World Cup qualifying match, or even on St Patrick’s Day. It made me realise that indeed, a sea change has taken place in Irish politics. And part of it is the inevitability of Sinn Féin and Fianna Fáil coming to some kind of governing arrangement, due to one, profound unifying principle: it’s the republic, stupid!

1 Coronavirus: 243 more cases, seven further deaths reported in the State
2 Ireland’s teenage pariahs: ‘We are really at breaking point now’
3 Late Late Toy Show: Music, tears, Tubridy’s F-bomb and €5m for charity. What a night!
4 400 – yes, 400! – Irish retailers for all your online Christmas shopping
5 Shot, bayoneted and clubbed: the ruthless lengths the IRA went to at Kilmichael
6 Former editor appointed as new Government press secretary
7 Man arrested over murder of Seema Banu and her two children
8 Ireland in precarious position as third Covid-19 wave could be more deadly, Nphet warns
9 Jim McGuinness: There is a way to save championship and make it competitive again
10 Astronaut Chris Hadfield offers to ‘talk space’ with Adam from the Toy Show
11 One man dies, five injured after partial building collapse in Tralee
12 'It just doesn’t feel safe': The restaurants that will not reopen in 2020
13 Best books for Christmas 2020: Fiction, biography, sport and kids’ books
14 David McWilliams: We need to reinvent our empty city car parks
15 Fintan O’Toole: To counter vaccine sceptics, we must understand them
16 Hotels, retail, hairdressers, churches, gyms to open next Tuesday
17 Will Europe shut down its ski resorts this winter?
18 US court rejects Trump’s attempt to block Biden win in Pennsylvania
19 Ex-barrister Patrick Russell conned people out of more than €12m, gardaí say
20 Ryanair customers may face charges of up to €100 to cash refund cheques
21 Brexit: UK seeks to strip EU fishermen of 80% of fish caught in British waters
22 Kony’s children: The former child soldiers of Uganda
23 Basic income for all: Has the Covid crisis given us a new economic model?
24 Republic to move back to Level 3 as shops open from Tuesday
25 Holidaymakers should avoid booking sites and go direct, survey says
26 Government settles on Covid strategy after 'Battle of the Spreadsheets'
27 Older men’s fixation with younger women really boils my kidneys
28 Sordid murder of hurling brothers still resonates in south Galway
29 Autumn Nations Cup - Ireland v Georgia: TV details, kick-off time, team news and more
30 My pet and me: ‘They just make everything better’
31 Viggo Mortensen: It ‘felt awkward’ replacing Stuart Townsend in Lord of the Rings
32 Only way is up for Stripe as valuation skyrockets
33 Klopp furious as injuries mount and VAR decisions prove costly
34 Penneys reopens and plans for 39 consecutive hours next week
35 Miriam Lord: Helen McEntee holds up well for someone with barely a leg to stand on
36 Breda O’Brien: Data collection on abortion is a travesty
37 Nine more coronavirus deaths reported in Northern Ireland
38 John Belushi: ‘It’s hard to watch him and not smell the alcohol and drugs’
39 The Stairlift Ascends: An unlikely duo and their new Covid book
40 The kitchen smells of rum. Either my old dear is over or Sorcha’s baking a Christmas cake
Real news has value SUBSCRIBE