EU should ‘take a stand’ on united Ireland, says McDonald 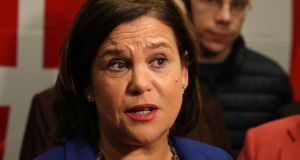 Sinn Féin leader Mary Lou McDonald has called on the European Union to “take a stand” on the Border question and support a united Ireland in the same manner it supported the reunification of Germany.

In an interview with BBC’s Newsnight programme, to be broadcast on Monday night, Ms McDonald said the party would be “making asks of the European system in terms of long-term Irish interests and on the issue of partition”.

“I think it would be correct for our allies, for our friends, for anybody who cares about this country and our people (sic), it is plain to see that partition and division has been a disaster and that reunification, reconciliation and good relationship with our next door neighbours is the way forward.”

Ms McDonald acknowledged that a disorderly constitutional transition towards a united Ireland would be “wrong” and “potentially dangerous”. Reflecting on the “Brexit debacle”, which she described as “ill-prepared, ill-conceived, not properly weighed and considered”, she said preparations for Irish unification needed to begin now.

Anybody who was “in touch with the dynamics of politics on this island” knew that Ireland was heading towards a Border poll, said Ms McDonald.

“It’s very irresponsible for politicians of any stripe to bury their hands in the sand on that score,” she said. “Whoever now makes up the next government, those preparations need to start.”

London should also start preparing for this constitutional change, she said. “We are going to have a unity referendum and I want us to do it in an orderly, thoughtful, democratic and absolutely peaceful manner.

“Whoever is taoiseach when all this plays out needs to make that case very plainly and very clearly to Boris Johnson, ” she added.

BBC journalist Lewis Goodwall, who carried out the interview with Ms McDonald and posted the transcript online, tweeted that the Sinn Féin leader had said she should become the next taoiseach. She said it was “the utmost hypocrisy”, that Fine Gael and Fianna Fáil refused to work with Sinn Féin, given that they “insist on others doing so in NI”, wrote Goodwall.