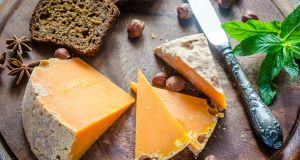 Mimolette is noted in France for the role of cheese mites in creating its distinctive rind and flavour. Photograph: iStock

The late Maeve Binchy used to make an art form of eavesdropping in restaurants, at home and abroad. One day in 1978, she was having lunch in the French city of Boulogne and started listening to a group of businessmen, whose serious tone suggested they were negotiating a deal.

Then the first man asked: “But is there a law which says we must have a great cheese?” To which the second responded: “I just think the mimolette is . . . well, it’s insufficient for the meal we have had. That’s my opinion. I have said it. I will say no more.”

This must be the sort of thing Charles de Gaulle meant when he complained about governing a country with “246 varieties of cheese” (an underestimate, surely – it has at least 1,000). In that case, however, he himself would have voted for the mimolette. A specialty of the Lille region, it is said to have been among his favourites.

Also known as Vieux Hollande, because of similarities with Edam, mimolette is noted in France for another reason: the role of cheese mites in creating its distinctive rind and flavour. Yes, like the Stilton Daniel Defoe enjoyed in 1724 (mentioned here yesterday), it too comes with live insects, albeit less visible than the ones he claimed to have eaten with a spoon.

Mimolette mites may be similar to the kind a more recent food blogger saw when visiting a restaurant in St Etienne some years ago. The host there selected an unnamed cheese, tapped a powdery substance off its surface into a bowl, then presented her with a magnifying glass to see the organisms at work, which she found “completely absorbing and also a little repulsive”.

In any case, the reason I have been researching mimolette and its likes is that, as I only learned since yesterday, cheese mites have also made a mark on Irish literature. They feature in the work of James Joyce, at least. But like Joyce himself, they were long misunderstood. Indeed, as literary scholar Armagan Ekici has pointed out to me, they were for 60 years the victims of a misprint in Ulysses.

Even people who have never read that book, concerning the events of a day in 1904, will probably know by now that its hero Leopold Bloom eats a cheese sandwich for lunch.  The cheese is Gorgonzola, but it causes Bloom to recall an adage about the digestive benefits of such dairy products in general, viz (as quoted in all early editions of Ulysses): “Cheese digests all but itself. Mighty cheese.”

A plausible comment, you might think, except that Joyce was never a man to pass up the opportunity of a good pun. And scholars now agree that there was a pun intended here.  Since a 1984 edition that cleaned up many similar errors, the second part of Bloom’s phrase is now usually printed as “Mity cheese”, a wordplay the first printers of Ulysses decided was a mistake.

Lest anyone doubt that Joyce (or Bloom) would have been familiar with such dairy science, Joycean detectives have also established that cheese mites were the subject of not one but two short films made in 1903.

Cinema was something in which Joyce took an early interest. And at least one of the films was shown in Dublin.

Furthermore, the pun was already established long before Joyce used it. An 1854 cookbook quoted the rhyme, loosely based on a Latin proverb: “Cheese is a mity elf,/Digesting all things but itself”. And to excuse the printers of Ulysses, the phrase had also been written as “mighty elf” on occasion, as early as the 1860s.

So there you have it. The mimolette Maeve Binchy overheard debated in Boulogne was undoubtedly mity. Whether it could be called mighty too may still be a subject of controversy there.

One other, slightly disturbing detail I discovered in my researches, by the way – and apologies if you’re reading this over lunch – was in an Irish Times “ask the doctor” column of 1907. Responding to a reader’s query about scabies (aka “the itch”) then, our correspondent said that the microscopic insects involved looked like “cheese mites”. Don’t let that put you off your sandwich, reader. But the next time you hear somebody described as, in the popular Irish phrase, “a mighty man”, you may want to think twice before sitting near him.