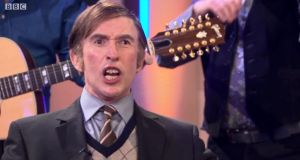 It took an English comedian, Steve Coogan, via the BBC, to relaunch Come Out Ye Black and Tans to an Irish audience. Photograph: BBC

There is a double irony in the revived popularity of Dominic Behan’s Come Out Ye Black and Tans, a song that briefly topped the British singles charts (or what passes for them now) last month.

Firstly, it took an English comedian, via the BBC, to relaunch the ballad to an Irish audience. But in the process, as confirmed by its latest public outing, at Sinn Féin election celebrations, the song appears to have lost some of its comic quality.

Most people only listen to choruses, unfortunately. So in the same way that Ronald Reagan mistook Born in the USA for a patriotic anthem, there are many now who think that Come Out Ye Black and Tans is a serious contribution to the rebel genre.

Whereas, as made clear in the opening verse, it’s a eulogy to pub republicanism, describing how the singer’s father used to get drunk every night and then annoy his Dublin neighbours by challenging them to combat.

Okay, in the words of the old euphemism, the Behans were well known to be sound – and not just in decibel levels – on the national question.

And the song doesn’t go quite so far with the unreliable narrator technique as the Rubberbandits’ Up The Ra, which relocated the Famine to 1916, when Britain stole the “seven counties of Ulster”, forcing Éamon de Valera to invade London (on horseback), where he died of hunger strike.

But in elevating the village of Killeshandra to a central role in the War of Independence, the lyricist was entering the realms of fiction. That part of Cavan was conspicuously quiet in those years, to my knowledge.  It was and remains best known for having a creamery.

What recommended it for the song, mainly, is that it has four syllables and rhymes (sort of) with “Flanders”. But if Behan had been in more serious mood, he might have opted instead for Ballylanders, in Co Limerick.

That would have been a better rhyme and ticked most other boxes, including the “green and leafy lanes”. I suspect that, circa 1920, you would also have been more likely to find Black and Tans there, running away or otherwise.

In fact, on a serious note, one of the many real ambushes of 1919 happened at nearby Knocklong railway station, where the IRA rescued an imprisoned colleague in a gun battle that killed two RIC men.

Two prisoners were subsequently executed for the attack in Mountjoy Jail, where their bodies lay for 80 years. You may remember that in 2001, these were among 10 republicans, including Kevin Barry, whose remains were exhumed and given a State funeral.

The timing was criticised, coinciding as it did with the run-in to the 2002 general election. But in any case, only nine of the 10 bodies went to the republican plot in Glasnevin. The exception was Patrick Maher’s, one of the supposed Knocklong raiders, although he always protested his innocence. His went home to Ballylanders, as the family wished.

But getting back to the BBC and its curious relationship with Irish rebels, it is a now mostly forgotten fact that Stephen Behan – father of Dominic and Brendan and possible inspiration of the song – was enough of a celebrity in his own right that he once featured as the subject of This is Your Life.

It happened in 1962, during the same series that honoured Richard Attenborough and Hattie Jacques (the perennial “Ooh matron!” character of the Carry On films). And of course, as was always the case with This is Your Life, it too involved an ambush.

The show’s unsuspecting targets had to be lured into a situation where Eamonn Andrews could surprise them with the title line, and the Big Red Book, before whisking them into a studio where friends and family awaited.

In Stephen Behan’s case, he was invited ostensibly to be part of a programme audience. The most dangerous element of the mission was keeping Brendan Behan sober enough to participate (he had been repeatedly considered as a guest himself but deemed too great a risk).

In the event, things ran smoothly, although the target fluffed his set-up line. Not that this was, or could be, scripted.  But after pretending to learn that the old man was father to Brendan and Dominic, Andrews asked him who, when the famous sons were at home, did most talking?

He was expected to say “Me, of course”, which would have teed up the announcement. Instead he said: “Hah! Their mother.” That would have been a whole other programme. But it got a big laugh anyway, and the book of evidence was duly served.