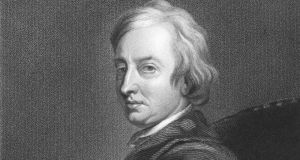 As for the sentence-ending prepositions John Dryden didn’t like, he was only expressing an opinion. It took another century for this to harden into a rule.

It probably didn’t cost them the election, or maybe even a single vote. But there must have been many people of a certain age who thought Fine Gael’s first big mistake of the recent campaign was the slogan “A Future to Look Forward to”, ending as it did with a preposition.

Most of us will have at least a vague recollection that this is against the rules of grammar.  For some, who had it beaten into them, there may be nothing vague about it. Few of us, however, could explain the rule, or say why flouting it is such a bad thing

The ban started, as far as language historians know, with the poet John Dryden. One day in 1672, he diagnosed what he thought was a bad habit of Ben Jonson, in such lines as: “The bodies that those souls were frighted from”. Dryden lamented this “preposition at the end of a sentence, a common fault with him, and which I have but lately observed in my own writings”.

Sure enough, he went on to conduct an audit of his own writings, or some of them, eliminating the supposed error where he found it, although he left at least one famous example for posterity.

Hence his description of literary creativity: “[T]he faculty of imagination in the writer, which like a nimble Spaniel, beats over and ranges through the field of Memory, till it springs the Quarry it hunted after”.

As for the sentence-ending prepositions he didn’t like, in fairness to Dryden, he was only expressing an opinion. It took another century for this to harden into a rule. The catalyst was Robert Lowth, a clergyman and Oxford professor of poetry, who in 1762 published A Short Introduction to English Grammar, the first of its kind.

Even then, Lowth wasn’t chiselling it in stone. Noting that writers, including Shakespeare and Swift, had been using terminal prepositions for centuries, he agreed it was common in speech and therefore suited the “familiar style” of writing.

But he suggested that placing them before the related noun “is more graceful, as well as more perspicuous; and agrees much better with the solemn and elevated style”.

It was Lowth’s apostles who elevated the guideline into law. As Fowler’s Dictionary of Modern English Usage suggests, this led eventually to the apocryphal story of Winston Churchill, in rebellion against a writer’s clumsy attempt to avoid the supposed mistake, writing in the margins: “This is the sort of English up with which I will not put.”

That never happened, apparently. Nor, I suspect, did the story about a snobbish English teacher in Atlanta Airport being asked by a friendly Southern Belle: “Where y’ll goin’ to?” The snob refused to answer people “who end their sentences with prepositions”, so the Southerner rephrased the question: “Where y’all goin’ to, bitch?”

But whether they were fictional or not, Fowler is broadly in sympathy with both responses. Not only are sentence-ending prepositions standard in many cases, the dictionary rules, they are sometimes “obligatory”.  Avoiding them often leads to a “starchy, stilted, formal style”.

I was reminded of all this by a piece in the latest issue of the Economist. No, not the cover story, which reflects on the election results here and asks: “A United Ireland: could it really happen?” Elsewhere in the magazine, by pure coincidence, there is also a piece on the baleful influence that some early grammarians still have on English.

Among other things, this mentions the irony that, in the mid-19th century, when philologists were becoming more flexible about the rules of language, the “popular market” was going the opposite direction, embracing Lowth and his likes: “The ambitious middle classes demanded books that told them what to do, memorable strictures with no exceptions”.

Speaking of the “ambitious middle classes”, and getting back to Fine Gael, the worst stylistic error you could accuse the campaign slogan of was inelegance. But perhaps, while they were at it, the writers should have been hanged as sheep and stuck an adverb in there somewhere as well, eg: “A Future to Boldly Look Forward To”.

As with Irish political parties, or nearly, the first item on the agenda for some old-school grammarians still is the split infinitive. Lowth is not to blame for that one – he didn’t even mention it. Its origins are much older and more obscure, but just as groundless. Not that you should make a point of splitting infinitives unnecessarily.

If one passes you on the opposite footpath, minding its own business, leave it alone.  But if you do have to split one, feel free. There’s no good reason not to.