‘I support Monaghan Gaelic football team. It involves a lot of suffering’

Bittersweet Avondale – Frank McNally on Parnell, cross-country running, and kicking up a storm in Croke Park 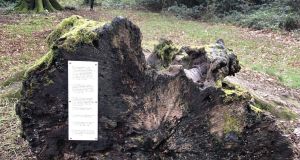 “One of the more poignant exhibits at Avondale, an old beech tree, fell over in 1972 aged 238. On a cross-section of the trunk now a sign dates the various rings to events in Irish history. Parnell’s 45-year-old life accounts for a mere three inches of the diameter.”

After voting in Kilmainham on election day, with Storm Ciara already brewing, I had to make a trip down to Avondale in Co Wicklow, former home of Charles Stewart Parnell. It was a journey full of historical resonance.

The climactic years of Parnell’s life began with his release from Kilmainham Gaol in May 1882, after he negotiated a compromise with the British government in the Land War which cost him some militant supporters in the short term but, in the longer, almost secured Home Rule.

It was called his “Kilmainham Crossroads”, which is of course a metaphor, although there was an actual crossroads involved as well. Released late at night, he took a cab that turned right onto South Circular Road, thereby avoiding the city centre, and reached Harcourt Street in time to catch a midnight goods train to Wicklow.

His old home at Avondale looks rather lonely these days, partly because it’s closed pending renovation, and partly because it’s an austere building anyway: gaunt and aloof, like Parnell’s forehead. It also seems haunted by his tragic demise. Speaking of elections and bad weather, the poor man was a martyr to both.

After his death, the house and lands became a State-owned centre for forestry education, which they remain.  One of the more poignant exhibits, an old beech tree, fell over in 1972 aged 238. On a cross-section of the trunk now, a sign dates the various rings to events in Irish history. Parnell’s 45-year-old life accounts for a mere three inches of the diameter.

The gardens at Avondale are dominated by a long, narrow, undulating stretch of pasture called the “Great Ride”.  Presumably the name comes from its use once as a horse gallop. It too felt lonely on Saturday, although in this case, my emotions may have been influenced by immediate circumstances.

On horseback would certainly be the best way to experience the Great Ride. Failing that, I recommend walking. But I had to run, because it was the venue for the National “Masters” Cross-Country Championships, in which I again found myself making up a team in the Men-Old-Enough-to-Have-More-Sense category.

The three-lap course included a hill the brutality of which might have represented cruelty to horses, never mind middle-aged humans. Even when descending it, as you did on one side of each lap, it was too steep to enjoy.

As for the other side, the nearest I got to feeling like a horse was the temptation to refuse, every time. For this and other reasons, my isolation from the main field grew with every lap.

If it had been an election, I would not have got my deposit back.

There was no time to linger in Avondale afterwards. With the sweat and mud still drying on us, we had to hightail it into Rathdrum to catch the second half of the rugby on TV.

Then it was back to Dublin, where the storm was now raging and where I had an urgent appointment at 7pm in Croke Park.

The trip there involved a second Great Ride of the day: this time via Dublin Bikes. It was a lot more enjoyable than the first. Because the journey from Kilmainham to Croker was the same direction as the wind, the hard bit was to stop.

Apart from running, as readers may know, my other hobbies in life include supporting the Monaghan Gaelic football team. This also involves a lot of suffering but, in its own way, it helps keep me fit. Saturday night was no exception.

For most of an extraordinary game, I enjoyed an intense aerobic workout celebrating all the Monaghan scores. This was only heightened by the scarcity of oxygen that occurs when your team is leading Dublin by 10 points, as happened here. Then the Dubs launched an inevitable comeback, and stress gradually replaced exercise, while calories at a similar rate.

The game ended level, but not before an event of considerable personal embarrassment. Amid the welter of excitement in the closing minutes, I had stood up for some reason – probably to protest yet another outrageous injustice on the pitch. Then I sat down again, more vigorously than usual.

But as I had somehow forgotten, when you stand up in Croke Park, the base of your seat rises with you. As a result, I sat down much farther and more violently than planned. The hurt posterior was as nothing compared with the other injury: my dignity will be out of action for at least a week. And traipsing home later, I was struck by the irony that, on a day when I wasn’t even running for election, I had somehow managed to lose my seat.