The Irish Times view on Qassem Suleiman’s killing: bracing for the Iranian response 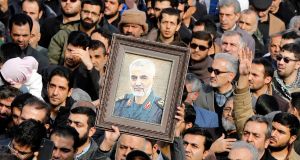 Thousands of Iranians take to the streets to mourn the death of Qassem Soleimani during an anti-US demonstration to condemn the killing of Soleimani, after Friday prayers in Tehran. Photograph: Abedin Taherkenareh/ EPA

Short of a military strike aimed at the residence of supreme leader Ayatollah Ali Khamenei in Tehran, the killing of the influential general Qassem Suleimani is about the most provocative act the United States could have carried out against the Islamic Republic. The assassination of Suleimani, in a US missile attack at Baghdad airport, will have ripple effects across the Middle East and increases the risk of all-out conflict between Tehran and Washington.

The 62-year-old general’s importance to the Iranian regime is hard to overstate. As long-time commander of the Quds force, the elite external security force of the Revolutionary Guards, Suleimani led Iran’s military activities across the Middle East and beyond. He was instrumental in the regime’s military operations, assassinations and unconventional warfare, directly and through its many proxies, in Syria, Lebanon, Iraq and Yemen. Few individuals wielded more influence in the region. For decades he operated in the shadows, but in recent years Suleimani had accrued a public profile. That made him a talismanic figure for the regime and arguably the second most important figure after the supreme leader, to whom he reported directly.

Suleimani’s vast power, his prowess as a warlord and his own extensive network of relationships mean his death will inevitably degrade Iran’s external capabilities, in the short-term at least. Yet the assassination is also virtually certain to provoke a response. In the latest round of tit-for-tat skirmishes between the US and Tehran, which broadly dates from the reimposition of US sanctions against Iran after Donald Trump’s repudiation of the nuclear containment deal, both sides have carefully calibrated their military operations to avoid pushing the other into all-out conflict.

But the killing in Baghdad is a dramatic break with that pattern. At a time when the regime is contending with the fallout from street protests at home, the Iranian leadership will be all the more eager to project strength abroad by responding to the US escalation with a form of asymmetric retaliation that demonstrates the capabilities and reach of the Quds force. Its strategic imperative will be to act in such a way that it saves face without provoking a US attack inside Iran.

The Trump administration said it had killed Suleimani because it was aware that he was planning attacks against American interests. That doesn’t explain the timing; Suleimani has been plotting such attacks for almost two decades. A more persuasive, and more alarming, explanation is that Trump, having hollowed out the deliberative national security structures in Washington and surrounded him with hawks and acolytes, simply took the decision when the opportunity presented itself, with little regard for, or even understanding of, the wider consequences.