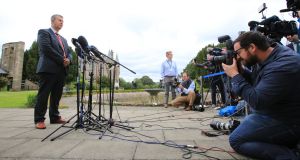 Stormont Minister for the Environment Edwin Poots: The entire debacle was met with a lurid amalgamation of exasperation and humour – social media posts saw users inquiring if others had contracted “Catholic Covid or Protestant Covid”. Photograph: Paul McErlane/EPA

It didn’t take long for our collective efforts against the threat of Covid-19 to be shouldered aside by polarisation and political point-scoring – sectarianism can rear it’s head in even the most benign situations in a region desperately trying to just move on. Stormont Minister for the Environment Edwin Poots – almost impressively – managed to turn a deadly global pandemic into a green and orange issue.

The Minister purported that Covid-19 is spreading more widely through nationalist communities throughout Northern Ireland, and that the “difference between nationalist areas and unionist areas is about six to one”.

He attributed this supposed contrast in nationalist and unionist communities to political leadership – choosing political football over public health messaging – and spurring the chief medical officer and Health Minister to publicly clarify that there is no link between Covid-19 cases and religious affiliations.

Covid-19 is an equal opportunities virus – you won’t be saved by how often you frequent church, or whether or not you believe in Marian dogmas

The entire debacle was met with a lurid amalgamation of exasperation and humour – social media posts saw users inquiring if others had contracted “Catholic Covid or Protestant Covid”.

Comments like these are of course tongue-in-cheek, but they’re no-doubt rooted in decades of sectarianism where even the most indiscriminate of afflictions can become twisted, distorted, and weaponised into a “themmuns vs ussens” argument by master manipulators.

The Poots’s fiasco dominated much of Northern Ireland’s political discourse, seeing those implicated by his bungle running through the usual stages of digging in their heels, making the situation substantially worse, and finally begrudgingly offering the best non-apology they can muster.

From attempting to claim his initial assertion couldn’t be seen as sectarian because Sinn Féin leadership “doesn’t go to church”, to saying he never attributed “religious affiliations” to the spread of Covid-19 – it was quite the show. ‘Twas ever thus.

That these misguided claims undermined his own party leader, and public health messaging seems irrelevant to his party colleagues, raising the question as to whether this was a solo-run, or a more carefully crafted call to the hard-core DUP base, not dissimilar to the dog whistles Donald Trump is infamous for in his efforts to call to arms those who subscribe to a comparably binary belief systems. The mealy words and lack of repercussions would suggest the latter.

Of course, socially, politically, and religiously, Covid-19 is an equal opportunities virus – you won’t be saved by how often you frequent church, or whether or not you believe in Marian dogmas, but there is a discussion to be had over a very real and pressing factor which often contributes to poor health outcomes – poverty.

Covid-19 thrives in the deeply embedded inequalities within our societies, leading some to label this pandemic a “syndemic”. First conceived by the medical anthropologist Merrill Singer in the 1990s, a syndemic approach reveals the complexities of socioeconomic deprivation and health outcomes and suggests that a one-size-fits-all approach doesn’t reach some of the most vulnerable within our society.

To fully understand Northern Ireland’s unique political landscape, it is crucial to take into account both the economic and health inequalities which critically and persistently affect the region. Over the decades, the poorest areas of Northern Ireland were often at the front lines of the Troubles, where they bore the brunt of the political violence, coalescing in a long-standing legacy steeped in deprivation.

Twenty years on from the Belfast Agreement, progress has been made, yet little has changed for the regions affected. It feels as though we take one step forward, and simultaneously one step back, trapping the people in a seemingly perpetual cycle of stagnation and division.

The expansion of integrated education is almost at a standstill, segregation in housing remains a significant issue, and we still don’t have a Bill of Rights to embed the principles of equality and mutual respect.

All of which maintains a cycle of dividing and sorting citizens by religious denomination or political leaning. We’re trapping ourselves in a web of segregation, the likes of which wouldn’t have appeared entirely out of place in the US throughout the first half of the 20th century.

Referring to the people of the North as either unionists or nationalists only perpetuates segregation. The people of the Republic Ireland aren’t referred to by their political or religious affiliations, but those of us half-an-hour up the road are referred to as one or the other.

The same criticism can be applied to the contrast between Northern Ireland and the rest of the UK, nowhere else is this phenomenon prevalent – not England, not Wales, not Scotland – the latter of which can literally be seen from our shores on a clear day.

This localised practice is a huge part of the problem, and it is a habit that both the Irish and British governments are guilty of helping to perpetuate. We are citizens first and foremost – what belief system we may or may not hold should never be seen as our only defining feature with which to brand us for political gain, especially in a region with such a turbulent history with weaponised ideology.

Two decades removed from the Belfast Agreement, our politics often feels more polarised than ever before, and it is that polarisation which drives so many of our young people away to places unencumbered with these divisions. Those who stay are forced to endure an oftentimes toxic political environment, which for many inevitably culminates in disengagement from politics entirely.

I was once a part of that younger generation, believing that I couldn’t make a difference, but it is worth us all remembering that our political representatives are elected.

For sectarianism to be eradicated, we need leadership and ambition to reform that which is broken.

Emma DeSouza is a journalist and citizens rights campaigner