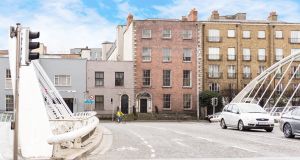 No 15 Ushers Island, Dublin, known as the House of the Dead because of its James Joyce connection

The recent proposal from Dublin City councillors Dermot Lacey and Paddy McCartan to transfer the remains of James and Nora Joyce from Zurich to Dublin as a way to celebrate Joyce as we approach the centenary of the publication of Ulysses (2022) looks set to die a quick death.

All evidence suggests that this is an ill-conceived plan for what will be nothing other than an act of cultural vandalism.

Far worse news awaits those interested in the Joyce legacy as one of the key remaining locations of Joyce’s Dublin, the house of The Dead at 15 Usher’s Island is now, once again, under threat. Demolition Ireland took care of 7 Eccles Street in the 1960s while the Ormond Hotel Bar and Barney Kiernan’s pub on Little Britain Street were just two among many other Joycean haunts that were wiped off our city map.

The news that the “dark gaunt house on Usher’s Island” – the setting of Joyce’s universally acclaimed short story The Dead – now risks destruction should alarm everyone who cares about the city and its cultural fabric. What we are faced with today, following the application from the developers, Fergus McCabe and Brian Stynes, is a plan to essentially gut and rebuild the supposedly “protected structure” as a 56-room hostel with a four-storey extension at the back.

All evidence suggests that this is an ill-conceived plan for what will be nothing other than an act of cultural vandalism.

The house at Usher’s Island has not had an easy history. Built in 1775, its upper floors were once rented by Joyce’s great-aunts in the 1890s. They ran a music school there. During the course of the 20th century, the house, like so much of Georgian Dublin, was allowed to fall into disrepair. It was almost lost to fire in the mid-1990s and was subsequently boarded up and remained derelict until 2000, when it was bought by Dublin barrister and quantity surveyor Brendan Kilty, who carried out substantial renovations and ran various Joyce-related events in it. Unfortunately, Mr Kilty went bankrupt doing so and the house was sold in 2017 on the instructions of receivers.

Dublin can build all the hotel/hostel rooms it likes, but if it continues to disregard and demolish its unique cultural heritage it will obliterate what remains of the heart of the city and there will be little left for visitors or indeed for Dubliners themselves appreciate outside of its newly built hostels and hotels.

Usher’s island, just a bridge away from Smithfield, which has recently enjoyed a cultural resurgence, should become a key part of a Joyce heritage trail that could include (among others) Moli at Newman House, the Joyce Centre on North Great George’s Street, Sweny’s pharmacy (itself under threat), and the Joyce Tower and museum in Sandycove. Some of it could also be used for housing without disfiguring the entire structure.

It is time now for councillors Lacey and McCartan, proposers of the motion to return Joyce’s remains to Dublin, to take a vocal lead in the battle save Usher’s Island. Current Dublin Lord Mayor Paul McAuliffe and Minister for Culture Josepha Madigan surely must consider what measures to take to ensure the preservation of this cultural treasure. When 15 Usher’s Island was sold by a receiver just two years ago, the listed guide price was a fairly measly €550,000. However, Dublin City Council said it had no interest in acquiring it. The government said nothing at all.