Fortune told in a Tokyo temple, and a fortune lost on an Irish train

An Irishman’s Diary: Written on a sheet of paper, the O-mikuji (sacred lot) can be bad or good 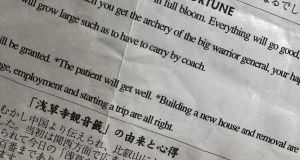 My fortune was headlined “regular”, so I brought that home. In keeping with the description, it wasn’t very exciting. Prospects for marriage, employment, and starting a trip were only “all right”. 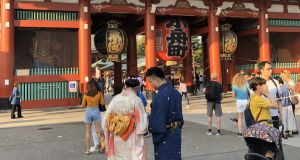 ‘The ancient Senso-Ji temple in Tokyo, where I followed the example of local pilgrims and had my fortune told.’ Photograph: Frank McNally 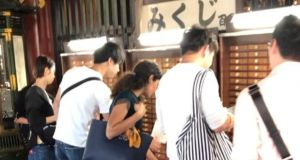 After you read the number on the stick, you find that number in a bank of small drawers nearby, and opened the drawer meant for you. 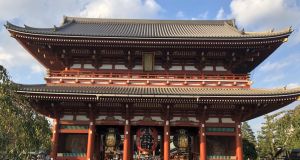 ‘The ancient Senso-Ji temple in Tokyo, where I followed the example of local pilgrims and had my fortune told.’ Photograph: Frank McNally

Visiting the ancient Senso-Ji temple in Tokyo last month, I followed the example of local pilgrims and had my fortune told. This involved shaking a cylinder full of sticks and turning it upside down until one of the sticks fell out through a narrow hole. Then you read the number on the stick, found that number in a bank of small drawers nearby, and opened the drawer meant for you.

Written on a sheet of paper, the “O-mikuji” (“sacred lot”) can be bad as well as good. But if bad, there’s an inbuilt insurance policy: you just tie the sheet to a sort-of clothesline apparatus and leave it behind you.

If it’s good, on the other hand, you bring it home and hope for the best.

My fortune was headlined “regular”, so I brought that home too. In keeping with the description, it wasn’t very exciting. Prospects for marriage, employment, and starting a trip were only “all right”.

There was also this, however, as translated: “When you get the archery of the big warrior general, your happiness it reassure, wealth will grow large such as to have to carry by coach.”

That sounded promising. But who was the “big warrior general”? How and where might I “get” his archery? And pending that, should I acquire a coach, or even a small van?

I still await answers to those questions. In the meantime, belatedly unpacking from the Japanese trip the other night and rediscovering the O-mikuji, I was reminded of an incident that happened just before I flew out.

Returning then from a train journey to a marginally less exotic destination, Mayo, I realised once home that my card wallet was missing. Panic ensued. Losing your credits cards and driving licence is inconvenient at the best of times. Doing it days before flying to Tokyo was a disaster.

Reviewing my movements, I remembered having the wallet as recently as two hours before, when paying for something from the train trolley. Maybe it had somehow fallen down the side of the seat and was still there, I thought.

Living near Heuston Station, I scampered back to search what looked like the same train, still on the platform. No wallet there or at the information desk, alas.

Then the card centre rang me.

A man called Tom had been on. His wife had found my wallet. He’d left his number.

So I rang Tom, thanked him profusely, and wondered where in Dublin he and his wife were. Nowhere, it turned out. They were in Kildare – that’s where my train had gone after a quick turnaround.

A pensioner, like himself, Tom’s wife had been in Dublin for a short visit and was now back home.

Oh well, I thought. At least it’s not Killarney. I got directions to where they lived and caught the 2.20 to Kildare. Then Tom rang me back to say he’d meet me at the station. Which he did, at the barriers: handing me not only the wallet but a note with details of the next Dublin-bound train, which I had just enough time to catch from the opposite platform.

I shook his hand and thanked him again. I also considered offering him something for his trouble but feared that might sound crass. Instead, on the way back, I decided to send a thank you card and stick a few lottery tickets in it.

But another problem now arose. I knew only his first name, and part of the address. Yes I could ring him and get more details, but that would ruin the gesture.

So instead I rang the local post office, explained the situation and asked if the address I had was valid and if it would be safe to send something there for “Tom and wife”.

Assured it would, I bought some quick-pick Lotto lines, took a picture, and posted them with the card.

Remembering all this now, and re-reading my Japanese fortune, I wondered could it have taken effect retrospectively. After all, the bit about my wealth being carried “by coach” now looked like a reference to the wallet’s round trip to Kildare.

So maybe I was the “big warrior general”, whose postal archery had sent an arrow conferring wealth on someone else, while reassuring my own happiness.

With some excitement, I dug out the picture of the ticket. Then I looked up the Lotto results from the date in question and compared them.

Sure enough, we hadn’t won. Not even a miserable “Match 2 plus bonus ball”. Sigh. So much for fortunes.