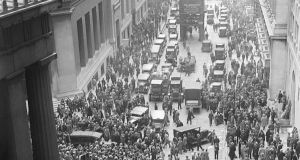 It’s 90 years today since “Black Thursday”, October 24th, 1929, the date commonly considered to have started the great Wall Street Crash. “Measured by disorder, fright, and confusion,” wrote John Kenneth Galbraith in his classic account of events, it deserved the billing.

“That day 12,894,650 shares changed hands, many of them at prices which shattered the dreams and the hopes of those who had owned them. Of all the mysteries of the Stock Exchange there is none so impenetrable as why there should be a buyer for everyone who seeks to sell. 24th October 1929 showed that what is mysterious is not inevitable. Often there were no buyers, and only after wide vertical declines could anyone be induced to sell.”

The panic was real and worsened in the days following.

But the mass suicides that supposedly ensued, typically said to involve people jumping out of skyscrapers, are an urban myth. Galbraith found that October and November were among the least suicidal months of 1929 in the US, with figures substantially lower than in summer, “when the market was doing beautifully”.

The legend may have been in part inspired by a bad joke. For his syndicated newspaper column, cowboy actor and humourist Will Rogers, who had been in New York that Thursday, wrote: “You had to stand in line to get a window to jump out of, and speculators were selling space for bodies in the East River.”

Or it may been the result of a more influential reporter, visiting from England, who claimed to have witnessed the aftermath of one such death from his room in the Savoy Plaza Hotel: “Under my very window, a gentleman cast himself down fifteen storeys […] causing a wild commotion and the arrival of the fire brigade.”

The reporter was Winston Churchill, who recalled the scene for the Daily Telegraph some weeks later.

But as Galbraith suggests, suicides that might have happened anyway could now be attributed to an obvious cause. The correlation was even expected: “Like alcoholics and gamblers, broken speculators are supposed to have a propensity for self-destruction.”

Hence another scene of drama, also recorded by Churchill, in which a worker, calmly smoking his pipe on a girder high above Manhattan, caused a traffic jam at street level where people gathered assuming he was a ruined investor about to jump.

Churchill was more than a mere witness of the chaos, he was also arguably one of its causes.

As British chancellor of the exchequer in 1925, he had returned the UK to the gold standard, a historic mistake that was copied by other countries and led to international pressure for easier credit at a time when markets were already overheating.

Galbraith again: “Churchill, it could be imagined, was viewing his awful handiwork”. But if so, he didn’t take it personally. “There is no record of anyone’s having reproached him. Economics was never his strong point, so (and wisely) it seems most unlikely that he reproached himself.”

One thing that did happen a lot as the disaster unfolded was the holding of crisis meetings. These were organised at the highest level, by the White House, even though president Herbert Hoover was a laissez faire capitalist, opposed to intervention.

Then again, his meetings were not necessarily at odds with this philosophy.

In of his book’s drily comic flourishes, Galbraith points out that business meetings can be held for many reasons other than to conduct business. Excuses range from the prestige they confer on those chairing them to the exchange-of-ideas justification (“nearly ironclad”, since “it is very hard to have a meeting of which it can be said that no ideas were exchanged”).

In the case of the White House, the motivation was another staple: the need to be seen to be doing something. It was crucial that the president simulate the appearance of action. Luckily, “Mr Hoover in 1929 was a pioneer in this field of public administration.”

Alas there were victims of the crash who did indeed take their own lives, although rarely in the manner of legend.

More typical was the Irish-American banker JJ Riordan, a popular figure in Democrat Party circles, who shot himself at home one Friday in November and whose death subsequently made headlines, although not quite as soon as it should have done.

It was first established, and then well publicised over the weekend, that bank funds had not been implicated in his losses.

In the meantime, pending Saturday closing, when the sad news could be more widely shared, there had been a variation on the traditional wake.

“Distinguished mourners had kept one eye on the corpse,” as Galbraith put it, “and the other on the clock”.