Unless party pulls itself together, it will fail to withstand challenges of government 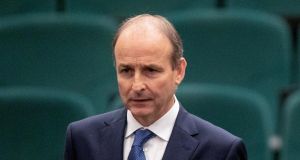 Taoiseach Micheál Martin: Perhaps he will never be forgiven by his own party for showing it how it had to change to regain power. Photograph: Maxwells

When the future existence of Fianna Fáil was in doubt in the days following the 2010 bailout, when candidates were machine-gunned in their droves by angry voters at the Somme-like massacre of the 2011 general election, in the days of penitential non-opposition to the Fine Gael-Labour government, one senior Fine Gael figure was in the habit of cautioning his colleagues who chortled at the fate of their old enemy. Be careful what you wish for, he warned them, you’ll miss them when they’re gone.

Based on the first fortnight of the new government we would certainly have missed the party had it died and gone away. For the comedy, anyway. The comedy, however, has been of the farcical variety.

Fianna Fáil’s return to government has been marked by a series of self-inflicted mishaps, accidents and disasters that have left its coalition partners and the Civil Service scratching their heads in a mixture of despair and bemusement.

Every government has its share of these; few so quickly. At the parliamentary party meeting on Wednesday night, John McGuinness warned that Fianna Fáil needs to show that it is different to Fine Gael in government. The Fine Gael wits piled in: haven’t they shown that already?

The new Ministers had hardly rested their posteriors on the upholstery of their ministerial cars when an uprising was under way among the ranks of the disappointed. At first, it focused on the ignominy of poor Dara Calleary, denied a full Cabinet position.

No vote at Cabinet, cried the legions of the dispossessed west of the Shannon, though Cabinet does not actually vote. (If you start voting in a coalition Cabinet, it’s over.) Mayo ignored again! wailed the local organisation, though Fianna Fáil Senator Malcolm Byrne’s analysis showed that, outside of Dublin and Cork, the county best represented in Cabinets since the 1920s is . . . Mayo.

Calleary’s public ventilation of (understandable) hurt at his omission gave licence to the next round of bellyaching when the junior ministerial appointments were made a few days later. Several TDs rushed to the local airwaves to scream blue murder. The béal bocht was remarkable for its complete lack of awareness of how this would be seen by many voters.

Politicians think about jobs for themselves all the time. That’s okay; our system of politics requires people to think that the world would be a better place if they were granted power and authority. If they didn’t think that, they wouldn’t put themselves forward for election in the first place. But believing you should be a minister is not the same thing as throwing your toys out of the pram when it doesn’t happen. The outpouring of indignation said one thing: politics is about us, not about the people. It is hard to think of a worse message to send out.

The indignation said one thing: politics is about us, not about the people. It is hard to think of a worse message to send out

By the time the controversy over Barry Cowen’s drink-driving ban arrived, the party had begun to look like a circular firing squad. That had no sooner died down with Cowen’s Dáil apology when a lurid subplot about who leaked it, and why, erupted. Journalists squawked their disbelief at one another as late-night threats and tweets flew and writs were threatened.

The sanitised summary of all that is that a new Fianna Fáil appointee was fingered by a long-time associate for leaking the Cowen story; the appointee denies all, insisting that his former associate is now mendaciously embittered. I know not where the truth lies here.

This is all mightily amusing, if you are so minded. It is also a sorry commentary on the state of Fianna Fáil, government or no government. This is not just the chronic indiscipline that Fianna Fáil TDs have displayed in opposition; it is the every-man-for-himself behaviour of a pack of looters.

Unless Fianna Fáil pulls itself together, it has no hope of withstanding the challenges it will face in government. Micheál Martin has prospered by paying attention to the public first, his party membership second (remember, he won 74 per cent of their votes for the coalition deal) and his TDs last. But now his TDs are undermining his leadership of the government. Grumbles one former party stalwart: “There is no discipline without fear.” Perhaps Martin – rather like Tony Blair – will never be forgiven by his own party for showing it how it had to change to regain power. Whatever it is, the Taoiseach’s authority over his own parliamentary party seems flimsy.

PJ Mara used to say that the great advantage Fianna Fáil had over other parties was that for all the scandals that afflicted the party in the Haughey years and afterwards, middle-ground, non-aligned voters believed the party knew how do government, could run the economy and display reasonable competence in most things. Insofar as it existed, that reputation was shredded by the financial crisis. On the evidence of recent weeks, it will not return.

Mara was a creature of the old Fianna Fáil which was serious about one thing above all: power. Sometimes that power was used for good, sometimes for ill, and sometimes – to its great shame – for private gain. But the party never wavered in its dedication to its acquisition, maintenance and preservation. The years of opposition appear to have stripped it of that central part of its character. You’d wonder if anything can hold them together in the trials that are surely to come.

1 Coronavirus: Warning against blame game as 46 more cases are confirmed
2 ‘I’m pretty sure that if I had been somewhere else they would have just let me die’
3 Why are there so many angry dads?
4 John Hume obituary: Nationalist leader who championed ‘agreed Ireland’
5 ASTI seeks agreement on pay as State plans to hire 1,000 teachers
Real news has value SUBSCRIBE