Rights are being trampled on, propelled by opinions of media elite 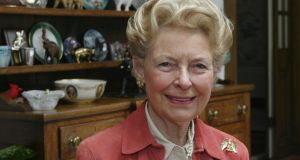 Last Wednesday’s piece by Kathy Sheridan (Covid pandemic a fertile ground for conspiracists, zealots and bigots) provided an insight into how many in the media and political establishment perceive themselves, as well as those with whose politics they disagree. The same day, the FX/Hulu television series Mrs America, premiered on BBC2. The programme illustrates well the gap between how the media establishment – in which “progressive” views predominate in both news and entertainment – perceives itself and the reality.

Mrs America is a big-budget dramatisation of the 1970s debate regarding the ratification of an amendment to the American Constitution called the Equal Rights Amendment (ERA). It is highly political, and leaves the viewer in no doubt as to the lessons that should be learned by today’s voters. The series charts the rise of Phyllis Schlafly, a conservative, pro-life, pro-family, stay-at-home-mom, who was the brains behind a massive, nationwide opposition to the ERA, which would have altered women’s rights in what she saw as a detrimental way.

Schlafly’s prescience was remarkable: she predicted the rise of abortion; increasing divorce resulting in poverty for women; the lack of choice for mothers to be able to stay at home to raise their own children; the end of single-sex schools; and the introduction of “co-ed” toilets.

From the opposite end of the cultural and political battlefield, the feeling is that the ideas that have underpinned western democracy and civilisation are being undermined

The unstoppable Schlafly is played by leading actress Cate Blanchett, who brings her formidable star power to the role. Predictably, Hollywood does its best to present Schlafly in an unflattering light. Bedroom scenes, family conversations around the dinner table, even a Catholic confession: all are invented to confirm that your low opinion of her is justified. While a certain amount of this is to be tolerated in any dramatisation, episode five is a particularly egregious example of the writers reversing the historical record for their own, clearly political, purposes.

In a scene taken from real life, Schlafly and her lawyer husband, Fred, take part in a television debate with feminist couple Brenda and Marc Feigen-Fasteau – also lawyers. The director goes to some lengths to recreate the scene accurately, with (wonderful) costume and set design. The tense debate reaches a climax when Schlafly is shown making up caselaw on live television and coming undone under Brenda’s withering cross-examination when called upon to “cite the case”. Schlafly is subsequently shown being upbraided by her husband for exposing herself – and him – in this naive and dishonest way.

Surprised that Schlafly would have made such an obvious blunder, I sought out and watched the full recording of the real debate. What actually happened was almost precisely the opposite of the dramatisation. Brenda made an allegation about a financial institution, which Fred called on her to substantiate. She could not. It was she – not Schlafly – who came undone under the spotlight and was exposed as inventing cases to suit her argument.

Very few people will take the trouble to read the history or go back to the primary sources. This facilitates the shameless attempt by the producers, writers and directors, not merely to take licence with the truth, but to turn it upside-down and inside-out. For a great many viewers, the depiction contained in Mrs America will become the historical record, despite the fact that the depiction of the event was not just a fabrication, it was a grotesque inversion of reality.

Is it any wonder then, that many in this country and elsewhere – who might identify with Schlafly’s politics – have no trust in the political or media establishments when brazen lies, distortions and villainous depictions are spewed, seemingly without even an attempt at a conscientious representation of the truth? Is it any wonder that some engage with conspiracy theories to try to make sense of why journalists, television producers and politicians would willingly twist the truth? Is it any wonder that people have no confidence in institutions that openly hate them?

From the opposite end of the cultural and political battlefield, the feeling is that the ideas that have underpinned western democracy and civilisation are being undermined.

The rights to conscientious objection, religious practice and to express a different view are being trampled on. This can be seen in our laws forcing doctors, against their will, to refer women for abortions; proposing exclusion zones for pro-life people who wish to engage in peaceful protest or prayer vigils; and forcing parents to have their children educated in a way that offends their religious and moral beliefs.

'Progressive' ideas form the dominant narrative in almost all Irish media outlets, across every major political party, and throughout the educational system at all levels

In this brave new world, political opponents must be vilified and crushed. The presumption of innocence, the right to due process and fair procedures, the principle of hearing the other side, are all under threat. There is no room for humour, forgiveness or redemption. Consider what happened to Kevin Myers in this country, or JK Rowling, or, currently, Terry Crews, a black actor who has expressed concern for the deaths of black children during the Black Lives Matter protests.

There are no neutral spaces; neither entertainment nor sports forums are free from political slogans. One cannot even look to the Garda, or take public transport, without being exhorted to “get on board” with whatever hue of rainbow-mania happens to be the flavour of the day. The polarisation and politicisation of everything has an unfortunate – if predictable – consequence: many think it must be met with an equal but opposite reaction to neutralise its effects. I think this is an error – extremism on either side begets more extremism – but I sympathise with how disenfranchised people feel.

Sheridan’s fears may be sincerely felt, but she and others fail to recognise that they are the ones in control, or acknowledge their own prejudice against those they disagree with (whom they brand “bigots”). Their “progressive” ideas form the dominant narrative in almost all Irish media outlets, across every major political party, and throughout the educational system at all levels.

If they are discouraged by the tendency of those who disagree with them to move to the extreme, they might reflect on whether they, with all their cultural influence, should consider a more moderate approach themselves.