Country about to receive €16bn from EU’s coronavirus fund 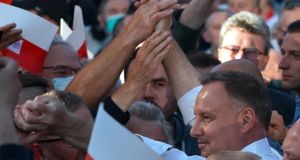 Polish president Andrzej Duda, a vocal supporter of the populist PiS Law and Justice Party greets supporters in Lomza, central Poland. Since the president can veto legislation there is more at stake in this election than the domestic and international projection of a figurehead. Photograph: Getty Images

Next Sunday sees a run off between the incumbent, Andrzej Duda, a vocal supporter of the populist PiS Law and Justice Party and Rafa Trzaskowski, the liberal mayor of Warsaw for the supposedly neutral office of president of Poland.

Since the president has the power to veto legislation there is more at stake than the domestic and international projection of a figurehead.

Since coming to power in 2015, and now in its second term, PiS has come increasingly to resemble its Hungarian ally, Viktor Orban’s Fidesz party. It has taken over media platforms, stacked the courts with right-wing judges and taken a xenophobic anti-EU stance to appeal to a largely rural base.

Auschwitz, that most potent symbol of man’s inhumanity, where some one million Jews were slaughtered, is often couched in terms of Polish suffering, uniquely. The tour guides now concentrate on the 75,000 Polish victims

But this being Poland, anti-Semitism is never far from the political discourse. To bolster its nationalistic credentials PiS enacted a law in 2018 that bans any accusation of Polish collaboration in the Holocaust. This has ignited a narrative of Polish victimhood often at the expense of any other, especially Jewish. Auschwitz, that most potent symbol of man’s inhumanity, where some one million Jews were slaughtered, is often couched in terms of Polish suffering, uniquely. The tour guides now concentrate on the 75,000 Polish victims. To politicise and exploit the Holocaust further, prime minister Morawiecki deliberately referred to “Jewish perpetrators of the Holocaust”.

And now the question of restitution of property to Jewish victims of the Holocaust has been commandeered by PiS as a cynical ploy to scare the electorate. In a recent broadcast TVP, the TV channel that operates as a mouth piece for PiS made the outrageous statement that restitution claims amounted to, “giving money back to the Jews for the second World War”, which would mean that “Poles will be denied state funds to satisfy Jewish demands”. The stereotype of Jews bleeding Poles dry for money is not new in this part of Europe.

Because of the dual occupation by the Nazis and then the Communists, restitution of property to Jews and others has been particularly complicated in Poland.

In a callous attempt to put an end to this problem, PiS proposed new legislation that would cap claims at 20 per cent of pre-war values or 25 per cent in Polish bonds. To qualify, heirs would need to be direct descendants, and resident Polish citizens. Very few Holocaust survivors remained in Poland after the war. The proposal has not been enacted but is clearly designed to make it virtually impossible for Jews to receive any compensation.

My grandfather, Pawel Rozenfeld owned a stocking factory in Lodz, built by his father, Mozes. In November 1939 he was arrested by the Gestapo and Polish policemen, taken to a prison and murdered in a forest the following day

The argument against restitution states that many non-Jewish Poles lost their property and were never compensated and that Jews and Poles alike were victims of the Nazis. Poland should not be made to pay compensation for the crimes of the Nazis, and subsequently the Soviets. Where would such claims end?

The problem is one of scale and geography.About 90 per cent of Polish Jewry was exterminated. The Communist-era purge of 1968 left a population of 30,000 Jews which dwindled down to 8,000 by the early nineties. This from a pre-war high of 3.2 million. Any unclaimed property is now used for the benefit of Poles or others. When one considers that a property may also be the only emotional link to a destroyed family and community, it is clear that restitution is often about much more than money.

Murdered in a forest

My own experience may shed some light on the complexities involved. My grandfather, Pawel Rozenfeld owned a stocking factory in Lodz, built by his father, Mozes. In November 1939 he was arrested by the Gestapo and Polish policemen, taken to a prison and murdered in a forest the following day.

After the war my grandmother, who survived along with my mother, first looked for compensation from the Germans as they had set up a scheme in 1952 to compensate Holocaust survivors.

However, a canny lawyer explained that because she couldn’t prove that the factory hadn’t been used for the Nazi war effort any claim would be void. How that was considered just with the owner dead in a pit within 10 weeks of the occupation is another day’s work.

Since the Soviets had requisitioned the factory for the state, a policy that continued until 1962, there was a blanket ban on compensation by the Polish government in such cases.

Particularly galling is how the factory is promoted on tourist sites as a fine example of Bauhaus architecture. They mention that it was founded by Mozes Rozenfeld and then was simply taken over by the state in 1940. Perhaps the tourists wouldn’t be comfortable with the whole truth?

For my part, I’m tired of listening to Polish politicians watering down the suffering of Jewish Holocaust victims and embracing the kind of anti-Semitic tropes that weaken Poland’s democratic values and moral standing in the world.

I’m sickened that, far from being outlawed Radio Maryja, founded in 1991 by a Redemptorist priest, Tadeusz Rydyk spews out anti-Semitic and homophobic bilge and is embraced by the government.

The Vatican, which has warned the station to stay out of politics should excommunicate its producers and owners.

Poland is about to receive €16 billion from the EU’s coronavirus fund on top of the €9 billion in grants it received last year. If the EU is serious about upholding the rules of membership now would be the perfect moment to leverage political reform.

1 Kathryn Thomas goes staycationing just as new travel restrictions come in
2 Coronavirus: No further deaths and 57 confirmed cases reported in State
3 ‘No demand... because there are no people’ at well-known Dublin pub
4 O’Doherty ‘trying to evade’ service of defamation proceedings, court hears
5 When will the first Covid-19 vaccine be used in Ireland?
Real news has value SUBSCRIBE