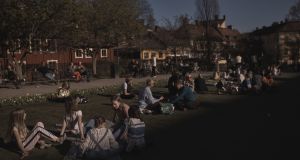 Sweden had been the unlikely poster boy for a laissez-faire approach to the pandemic, the champion of leaving it to its civic minded citizens to demonstrate good sense and social solidarity by social-distancing voluntarily. The government allowed restaurants, gyms, shops, playgrounds and most schools to remain open. But it is poster boy no more, and a salutary lesson to countries such as the US and Brazil whose leaders have flown the same libertarian flag.

The result in Sweden, a country of only 10 million, has been disastrous – since May 15th, it has witnessed 5,420 coronavirus-related deaths, 40 per cent more deaths per 100,000 population than the US, 12 times more than Norway, seven times more than Finland and six times more than Denmark. Neighbours Denmark and Norway opted for strict quarantines, banning large groups and locking down shops and restaurants.

As one newspaper put it, Sweden carried out a “large open-air experiment” that flew in the face of global scientific consensus, to allow the world to examine what happens in a pandemic when a government allows life to carry on largely unhindered. Research suggests that that only a third of Swedish residents voluntarily self-isolated.

It is paying a heavy price for the notional aim of letting its economy run unimpeded – and even that did not happen. The central bank expects its economy to shrink by 4.5 per cent this year, and unemployment has risen to 9 per cent, evidence that it is not primarily government lockdowns which cause most economic damage but the uncertainties and changes in consumer behaviour caused by the pandemic.

“Norway, on the other hand, was not only quick to impose an aggressive lockdown, but early to relax it as the virus slowed and as the government ramped up testing,” the New York Times points out. “It is now expected to see a more rapid economic turnaround.”

Sweden’s cautionary tale is a timely reminder that the infectivity of the far-from-vanquished pandemic must not be underestimated; the potential of a second wave in Ireland remains very real. Countries face real difficulties in keeping coronavirus curves down after they have been flattened.

Those tempted to join street parties on Dame Lane or elsewhere should note the reintroduction of obligatory face masks in Catalonia, the reality that most of Australia is now off limits to people from the state of Victoria, where Melbourne is the capital, and that, as President Donald Trump continues to press for a broader reopening, the US on Wednesday set another record for new cases. More than 59,400 infections were announced as the virus continued its resurgence in the south and west. At least five states – Missouri, Tennessee, Texas, Utah and West Virginia – set single-day records for new infections .