World View: At the root of British antipathy lies a fear it is a dark plot to indoctrinate the young in the ideology of Euro-superstatism 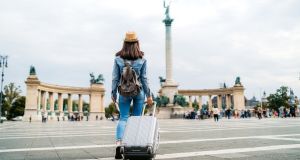 Since Erasmus began in 1987, more than 9 million people have studied or trained in another European country. Photograph: iStock

Its loss would have little material effect on the lives of most British citizens and the talks on its future were understandably overshadowed by the larger stand-off over the long-term trading relationship between the European Union and the UK.

Yet there was something profoundly sad about the news, announced last week and barely noted in parts of the British media, that the UK was unlikely to remain in the Erasmus study abroad scheme because efforts to strike a deal on its continued participation post-Brexit had failed. If anything encapsulates the senselessness – the tragedy – of Brexit, it is this.

The UK’s access to EU programmes was part of the broader negotiations that trundled on for much of the year, but Michel Barnier told members of the European Parliament last week that the negotiating “chapter” that includes educational exchange had closed without agreement. That was duly confirmed in the deal struck between the two sides on Christmas Eve.

At issue was UK membership of Erasmus+ – the EU’s umbrella term for its panoply of cross-border schemes in higher education, training and adult learning – for the budget period 2021-27.

The EU offered the UK access to the entire programme for seven years, but London preferred not to commit for that long and was only interested in the university mobility part of the package, which is by far the biggest. That’s not how it works, the EU insists. Erasmus+ is no longer just a student exchange programme but a big and complex education support programme which in 2019 helped almost a million people to study, train, work or volunteer abroad.

The British government’s position was ostensibly driven by concerns about cost. Cherry-picking parts of Erasmus+ would be cheaper for London, which would have to pay a fee to access EU schemes calculated on the basis of its gross domestic product. But as ever with Brexit, ideology was not far beneath the surface. The Brexiteers detest parts of the full Erasmus offering, including those bits of it that focus on teaching and research in the field of EU studies and initiatives such as the European Solidarity Corps, a portal for volunteering and traineeships in civic and environmental projects.

The antipathy goes back as far as Margaret Thatcher, who threatened to block an early iteration of Erasmus in the 1980s for what she saw as mission creep. At its root is a belief that Erasmus, which to the naked eye may appear a benign tool to give students new languages, friends and a good time, is in fact a dark plot to indoctrinate the young in the ideology of Euro-superstatism. The British government was so adamant that it wouldn’t sign up to the full package that it began preparing some time ago to give up the exchange scheme and start its own equivalent (albeit, perversely, one that doesn’t involve foreign students coming to the UK).

Erasmus is one of the most successful things the EU has ever done. Since it began in 1987, more than 9 million people have studied or trained in another European country. They learned new languages and skills, soaked themselves in different cultures, enhanced their employment prospects and built relationships for life. In a very real sense, they became Europeans.

Enabling that sense of shared identity to emerge was always central to the idea. “The university exchange programme Erasmus is barely mentioned in the business sections of newspapers, yet Erasmus has created the first generation of young Europeans,” Umberto Eco told La Stampa in 2012. “I call it a sexual revolution: a young Catalan man meets a Flemish girl – they fall in love, they get married and they become European, as do their children.”

John le Carré’s obituarists last week rightly dwelled on the writer’s Europhilia; a fluent German speaker, he moved easily between cultures. In a speech at the German embassy in London in 2017, he spoke of England’s “most precious asset: its enlightened young, who – Brexit or no Brexit– see Europe as their natural home, Germany as their natural partner and shared language as their natural bond.” But Brexit will make it harder to establish those connections. Hundreds of thousands of British students availed of the Erasmus grant to study elsewhere on the continent over the last 30 years. Some of them might have gone anyway, but many – in particular those on lower incomes – would not.

In opening the continent to young British citizens, Erasmus helped produce a generation at ease with its European identity, one for whom the Brexiteers’ inward-looking, zero-sum view of the world made little sense. It stripped away the “Europe” concocted in the wilder corners of the Tory imagination and allowed young people to see their continent for themselves. That’s why the Brexiteers despise Erasmus – because it’s an open challenge to everything they purport to believe in.