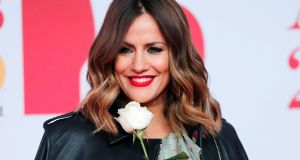 British television presenter Caroline Flack: her arrest and charge with assault precipitated her becoming a target of much abuse. File photograph: Eddie Keogh/Reuters

The death of Caroline Flack has again thrown the issue of trial by media into relief. Flack is not the first person to take her own life after being vilified. The attribution of her suicide to the relentless portrayal in print and social media of her personal problems is rife but Flack, in both life and death, is more than any of these portrayals. Given what we know about suicide contagion, speculation about her death is both risky and unhelpful. Nonetheless, her high-profile death should cause pause for thought. Why do people feel they can abuse celebrities online without consequence?

Oddly, despite the personal nature of the attacks, abusers are rarely motivated solely by the personalities at the centre of the storm. In most cases, there tends to be a trigger event that brings the celebrity into public view. In Flack’s case her arrest and charge with assault precipitated her becoming a target of much abuse.

This is not a new phenomenon. Nor a rare one. It is simply another manifestation of trial in the court of public opinion. Indeed, the law here and in the UK seeks to protect those accused of crimes from “the lynch mob”.

You do not have to be a celebrity to encounter some particular form of this nastiness. That is worth remembering on the next occasion you feel you have taken a direct hit. Trolling is much more about the trolls than it ever is about you.

So what makes them do it? The way a story emerges into public view is central to the emergence of abuse. So, in this regard, “tabloid culture” is very important. Tabloid headlines have come under scrutiny in the wake of Flack’s death. And so they should. They set the tone and have clear effects on what follows.

The initial framing of a story seems to be more important in determining whether or not people troll the individual concerned than any other factor. In one study on a large US university campus, researchers studied more than 3,000 online conversations. Where a story was recounted unsympathetically, negative online commentary including abuse was much more likely to ensue.

Counterintuitively, perhaps, this framing of the story is particularly important in contexts where social interactions are anonymous – as they often are online. Psychologists used to believe that those acting anonymously are unconstrained, feeling free to act selfishly, irresponsibly or without due regard to others. Some years ago, I unintentionally demonstrated the problems with this theory in a lecture of 200-odd students. I asked the students to think about something that they would like to do, anything at all, if they were assured of anonymity for a day. What became very clear, very quickly, was that the students, rather than being unconstrained in their choices, had suggested a range of acts that were directly relevant to the social context. My students, rather than demonstrating free thinking, responded to the task with an eye to entertaining their fellow students.

And herein lies the problem. News is informative and entertaining. The press have argued that high-profile criminal cases such as Caroline Flack’s are in the public interest. However, the ease with which some use news to judge and mock others makes it feel much closer to feeding the baying mob.

But who are these baying mobsters? It would appear that those who are most likely to post online hate tend to be tired and emotional. In a study of a large US university, posts appeared to be the most abusive and foul when the posters reported that they were angry or in bad humour.

Perhaps because of this, trolling often peaks late in the day. Then, people are tired and more bad-tempered. And this is when negative commentary is least likely to be shut down. There are fewer level-headed moderators around. And so each comment shifts the tone and each troller lowers the bar.

Paradoxically for those who are isolated and bad-tempered, these online interactions may get them through the night. They can connect with others who share their interests, act out their anger. Others may view their comment as reprehensible or unwarranted. And of course they are visible to the target. In the gallery of online spectators, engagement from those with whom they disagree is grist to the mill. A response from a celebrity is the ultimate reward. It will only enhance likes and shares.

Without a concerted effort to tackle this issue, it will not go away. It is a self-propagating phenomenon

Studies show online abuse more than any other form of commentary relies heavily on memes. They are the life-blood of the troll. These visual representations can be seen as shared cultural understandings between user groups. In short, those that post abuse believe that their social network will be interested if not entertained by their contributions. Posters vie to entertain and engage. Comments and memes are applauded metaphorically via “likes” and “shares” and new “followers” .

Without a concerted effort to tackle this issue, it will not go away. It is a self-propagating phenomenon. Trolling that goes unchallenged escalates. And for us all, this online world is now an inextricable part of all of our social worlds. It is time to tackle the 21st-century version of the lynch mob to ensure our online world can be maintained as a civilised and civilising space.

1 Des Bishop apologises to Traveller community for comments in interview
2 One hundred Irish retailers for all your online Christmas shopping
3 Confirmed: Golf clubs must close under Level 5 Covid-19 restrictions
4 A further three deaths and 1,167 new Covid-19 cases reported in the Republic
5 How long can Government afford to keep State pension age at 66?
Real news has value SUBSCRIBE