Of dogs and dogma – Frank McNally on Orwell, Marx and history repeating itself 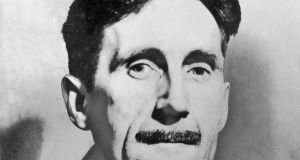 Dipping into George Orwell’s Diaries for August 1939 this week, I was briefly confused by his apparent references to Karl Marx.   It wouldn’t be unusual for Orwell to quote the great German philosopher in connection with contemporary events, then dominated by the looming war. But when on August 17th, for example, he mentions going shooting with “Marx”, it took me a moment to realise he was talking about a dog.

The dog was part of a menagerie Orwell and his wife kept at their home in rural Hertfordshire.

The collection also included some hens, whose production he recorded alongside world news.

I assume the dog to have been called after the socialist Marx, although Orwell said he learned about people from their reaction to the name, because some thought it was in tribute to Groucho, and a few even took it as a reference to the supermarket chain Marks & Spencer.

Anyway, I realised it wasn’t a two-legged Marx when the diaries described him chasing a “covey of partridges”, whereupon the mother partridge “did the well known trick of [distracting the dog] by flying rather slowly & squawking, while the young ones flew away in a different direction”.  Orwell goes on to mention other wild birds he saw that day, but the entry ends, typically, with the output of his domestic ones: “8 eggs (three small)”.

Elsewhere the same week, he records the Danzig crisis coming to a head, notes that the Germans are reported to be buying large stocks of copper and rubber for urgent delivery, and describes a story in Sunday Express as “anti-Jew propaganda”.

But on August 22nd, he returns to alarming developments on the Marxist-Caninist front: “Marx discovered to be very lousy, ears full of nits, no doubt owing to the hot weather. E[ileen] treating him with antiseptic soap, flea powder & also vinegar, which loosens the nits...” The diary adds: “11 eggs (four small).”

I’m not sure Orwell’s dog is what Karl Marx had in mind when he suggested that history always repeats itself, the first time as tragedy, the second as farce. But this week’s big anniversary (Napoleon’s 250th birthday) reminded of the quip’s context: the 1851 coup d’état by which Napoleon III seized power in France.

The original Bonaparte had sealed his dramatic rise with the “Coup of 18 Brumaire” (November 9th, 1799 in the traditional calendar), which also marked the end of the French revolution.

So after his less talented nephew tried something similar half a century later, Marx wrote an essay called “The Eighteenth Brumaire of Louis Napoleon”, which opened with the famous flourish: “Hegel remarks somewhere that all facts and personages of great importance in world history occur, as it were, twice. He forgot to add: the first time as tragedy, the second time as farce.”

Posterity has agreed this was a very witty – and wise – thing to say, so that it has been endlessly quoted, misquoted, and paraphrased ever since, whenever somebody or something with an unflattering echo of the past appears.  But Napoleonic coups apart, is it ever true?

The phrase depends for authority on that breezy aside, “Hegel remarks somewhere”, by which Marx invokes an even greater German philosopher and leaves the details to him.  So far as I can establish, however, Hegel said nothing of the sort. And in fact, whether he was quoting Hegel or not, Marx was repeating something his friend Friedrich Engels had just written in a letter about French events:

“. . . It really seems as though old Hegel in his grave were acting as World Spirit and directing history, ordaining most conscientiously with the greatest conscientiousness that it should all be unrolled twice over, once as a grand tragedy and once as a wretched farce.”

But according to one historian who took the trouble to track it down, Bruce Mazlish, the passage Marx and Engels were misremembering said the opposite.

Hegel’s starting point was ancient Rome, and Julius Caesar’s decision to end the republic, judged a mistake by contemporaries, until subsequent events persuaded them he was (dead) right.

History had to repeat itself to be taken seriously, Hegel implied: “Thus Napoleon was twice defeated, and the Bourbons twice expelled.  By repetition, that which at first appeared merely a matter of chance and contingency, becomes a real and ratified existence.”

In this context, Hegel seems now to be supporting the idea of a second UK referendum before Brexit is taken seriously.  But columnists and headline writers will probably continue to prefer the Marx-Engels version, which for the foreseeable future – and farcically echoing Orwell’s 1939 – may be dominated by a man who portrays himself as the second Churchill.

1 A vegetarian and a non-drinker visit Ireland: here’s their verdict
2 Rory Best regrets attending Belfast rape trial
3 Eyewitness to Auschwitz: ‘We were held in the wagons like animals’
4 Who are Ireland’s 17 billionaires?
5 Are there annual limits on inheritances or gifts to a child?
Real news has value SUBSCRIBE