Case for rounding up Leaving Cert marks just got stronger 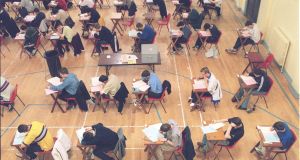 “In a high-stakes system, research tells us decisions have to be both fair and be seen to be fair.” Photograph: Peter Thursfield

This is the week that was. Many of us have very clear memories of our Leaving Cert results day. Or the day the CAO offers came out. Psychologists talk about a reminiscence bump. We have particularly good memories for things when they happen for the first time. We remember our first day at school, but not our 15th. We remember the first time we tasted an americano, though we now glug them down endlessly. So for many of us the Leaving Cert results day and CAO offers day are very easily recalled.

There is a second reason that Leaving Cert results day is etched large in the public consciousness: because it is a high-stakes exam. We are all busy trying to reduce the perceptions that somehow the Leaving Cert is a terminal exam: parents, teachers and students accept that this is not the case.

But the system is working against convincing us otherwise. Leaving Cert results are perceived as high stakes because they are linked to CAO offers. In a very important and everyday way, how you do in the Leaving Cert matters at least in the short term. It will determine the college offers students receive.

A student who scores 89.9 per cent in Irish is awarded a H2 rather than the much-cherished H1. Perhaps not the best way to support a love of the language

And it is because of this high-stakes nature of the exam that a number of changes in the process that have occurred this year are to be welcomed. This year, for the first time, students can see online the mark they got in the exams, as well as grade they are awarded. They can also see their script and the marks awarded for each component of the answer they gave in the exam.

Given that college places are allocated on the basis of these marks this is a really important development. Transparency in the grading process can only increase our faith in the examinations process. In a high-stakes system, research tells us decisions have to be both fair and be seen to be fair.

One of the issues, however, that process has and will throw up is the issue of students who are at or near a grade boundary. For example, a student who scores 89.9 per cent in Irish is awarded a H2 rather than the much-cherished H1. Perhaps not the best way to support a love of the language.

A student scoring 29.9 per cent in English will be awarded a H8. This mark will be made up of composite marks from two papers averaged out. Such a student, because of the 0.1 per cent deficit, cannot matriculate and progress to college even if they have the points requirements for their course.

Perhaps it is time to start thinking about giving students the benefit of the doubt, not least because positive feelings about a subject can also transfer from exam success

And a student with 39.9 per cent in higher maths, a pass in the new system, receives a H7. This missing 0.1 per cent has fairly radical implications for his or her points tally. This student would receive 33 CAO points for their H7. Had they got 40 per cent in the exam, they would get 77 points. In other words, they would more than double their CAO points for that subject by scoring 0.1 per cent more across two papers.

I am a research psychologist but I have also been involved in education and the marking and grading of examinations for 25 years. And so I can see that the issues thrown up by this new and most welcome transparency.

First, if we want to use education at the most general level to instil a love of learning or a particular subject such as our official national language, it is probably not a good idea to leave students feeling robbed of higher grades. I know at least one student who felt robbed of a H1 with a score of 89.83 per cent. It’s a shame because we know that negative feelings about the test performance can transfer to the subject in question. In fact, this has been an ongoing issue in those seeking to promote the Irish language.

Perhaps it is time to start thinking about giving students the benefit of the doubt, not least because positive feelings about a subject can also transfer from exam success.

We often, as psychologists, talk about the need to be consistent in the messages that we give our children. And here those in charge of the grading system dropped the ball. As one indignant Leaving Certer told me yesterday: “We learned to place value in primary school maths – 39.90 rounds up to 40.” I knew better than to argue.