Number of the Beast – Frank McNally on auspicious dates, inauspicious horses, and the theme of fertiliser in Flann O’Brien 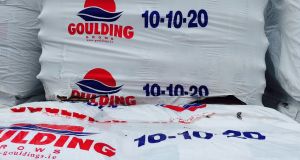 10-10-20: a set of numerals sure to resonate with Irish people of a certain age, thanks to years of exposure to farming advertisements eulogising that formula of nitrogen, phosphate, and potash, the soil-nutrient “Big Three”.

Saturday is National Fertiliser Day, a holiday you may not have heard about before, which is understandable, because I just made it up.

At any rate it’s 10-10-20, a set of numerals sure to resonate with Irish people of a certain age, thanks to years of exposure to farming advertisements eulogising that formula of nitrogen, phosphate, and potash, the soil-nutrient “Big Three”.

It seems therefore highly auspicious that, this Saturday afternoon, a horse named “Ten Ten Twenty” will be running in the 1.20pm at Limerick.

Having made its debut only last week in Tipperary, the two-year-old colt must have been prepared from some time ago with the epochal date in mind. And especially considering the close relationship between 10-10-20 and horse manure, impressionable punters, including me, might be very tempted to place a few euro “on the nose”, as they say, in the hopes that the sum would multiply via the animal’s other end.

One the downside, I note that he was a 50-1 outsider last week and fully justified that lack of confidence by finishing 13th of 14. Furthermore, as I write, he is predicted to be 50-1 again today, when he will have 15 runners to beat. Alas for coincidences, you would need to be a committed romantic to invest in that.

Still, I won’t be surprised if there are a few bets on the horse from the direction of Taiwan, where gambling and numerology are both popular.  There, October 10th – “Double Ten Day” as it’s known – is the national holiday, marking the anniversary of the Wuchang Uprising in 1911, which ended the Qing Dynasty and led to establishment of the Republic of China.

That brought the great Sun Yat-sen (who, by the way, had been an admirer and occasional correspondent of Michael Davitt) to power. Taiwan continues to see him as “Father of the Nation”, and even today, he is also widely revered in mainland China (where, since the communist revolution, the national day is October 1st instead).

Even for my Taiwanese readers, however, I cannot recommend a bet on Ten-Ten-Twenty. After all, one of the unfortunate things about auspicious dates is that they have a habit of falling, which is hardly a good precedent for a horse. But apart from anything else, conditions are unlikely to suit either.

I’m reminded that another Sun – Sun Tzu, author of The Art of War – spoke of the “nine varieties of ground” on which battles are fought. These are not necessarily the types you hear about at racecourses; they include “dispersive ground”, “hemmed-in ground”, and “ground of intersecting highways”. But the last on his list was “desperate ground”.  And that sounds like a fair prediction of the going in Limerick, although it’s officially just “heavy”.

I may restrict my own celebrations of 10-10-20 to rereading extracts from Flann O’Brien’s The Third Policeman, perhaps the greatest novel anywhere in which fertiliser is a sub-theme. As all Flannoraks will know, its character of “Old Mathers”, the miser, is alleged to have accumulated his wealth via an “artificial manure ring”.

Combined with the suspected “trickery” of the Freemasons”, this has made fertilisers impossible to buy. And true or not, it gives the impoverished narrator a moral excuse to kill Mathers with a spade, after the narrator’s accomplice has first knocked the victim down with a home-made bicycle pump (for those who haven’t read the book yet, that’s not a plot spoiler, it’s a summary of the opening sentence).

Outlandish as O’Brien’s novel may be, the murder motive at least was anchored in reality.

Look up the term “fertiliser ring” in The Irish Times archive and you’ll find it featured in a Dáil debate in 1952, about the obstacles facing land reclamation.

And at a Flann O’Brien conference in Rome some years ago, I heard an American academic set the novel’s plot against the background of real fertiliser shortages and resultant profiteering in the 1930s. The Freemasons were not to blame.It was a side-effect of the Economic War between Britain and Ireland.

Anyway, The Third Policemen is a work of bleak comedy.

So was a contribution in the Dáil this week by Michael Healy Rae, who revealed that his family would be among the many not celebrating the famous date.

Speaking of rings, his daughter Rosie had been planning to get married today. “It was going to be on 10-10-20, like a bag of fertiliser,” said the romantic father of the bride. Then Covid rules decided otherwise.

Yet another reason, in case you still need one, why that horse in Limerick may not be as good a bet as it first seemed.