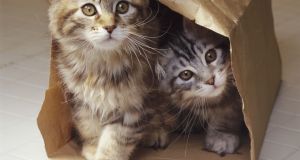 “For some years now, we have provided an occasional stop-over on a sort of underground railroad transporting stray cats and their offspring.” Photograph: Getty Images

An unintended effect of the State-wide move to Covid Level 3 is that, since Tuesday, our house has been overrun by kittens. This is because, for some years now, we have provided an occasional stop-over on a sort of underground railroad transporting stray cats and their offspring from an unofficial animal shelter in Tipperary (aka my in-laws) to new homes in Dublin.

Sometimes it’s more than a stop-over, as in the case of my beloved former cat Pete Briquette, whose impersonation of a tiny scrag-end of wet turf nearly got him killed under the wheels of my car on a bog road near Templemore some years ago, but instead earned him a new life in the city.

He stayed with us for four years to the exact day, before disappearing, never to be heard of since. I hope he’s still alive out there somewhere. Part of me suspects that, since we live near Heuston Station, he wandered onto a parked train one night, got locked in, and took the overground railroad home.

Anyway, the latest development in Tipp was a litter of five kittens, for which we had been working on adoption arrangements with various friends. The logistics were complicated enough as it was.

Cute as the marmalade quintuplets are, I won’t miss them when they’re rehoused.  The toilet habits of five kittens are stressful enough – you never know where they will strike next. But there is also their effect of our two adult cats, who need to be segregated from the newcomers. Not because they would attack them – on the contrary, they seem to be traumatised by their presence.

Our cats have been known to sit in front of the television for lengthy periods, watching sport. And I’m not suggesting they were aware of this week’s other deadline, the closing of European football’s transfer window. But like certain prima donna players faced with threats to their positions on the team, they have both been in a huff since our apparent new signings.

The black-and-white cat, despite being a hardened killer of everything else that is small and moves in our house and garden, is openly petrified of the kittens. She has to be carried in their presence and shakes with fear.

As for our adult marmalade, who has a much more laid-back personality – he kills the odd mouse, but only if it’s being really annoying – he’s not so much terrified of the kittens as quietly disturbed. The fact that he and they have similar markings doesn’t seem to help. When we tried introducing him to them, he backed away hurriedly, as if fearing a paternity suit.

Some readers may be wondering if our adult cats have names and, if so, why I’m not using them.

Well they do, but it’s complicated. The marmalade is called “Archie”, something people now tend to jump to wrong conclusions about, so I use it sparingly.

He was so-named by my kids – all of two years ago – after the comic book character Archie Andrews, who also has ginger hair.

Unfortunately, a certain royal family then went and copied us and of course everyone now assumes it was the other way around.

As for our tuxedo-patterned cat, the rest of the family call her “Maisie”, for reasons best known to themselves. I consider this beneath her considerable dignity. So instead, at first, I named her Marlene, after Marlene Dietrich, who was also known for wearing tuxedos.

Add to that her habit (the cat’s, that is, not the actress’s) of sitting on the 12-foot wall of our back garden, hoping to catch low-flying birds, and you get the longer name I gave her – Marlene-on-the-Wall, after the song by Suzanne Vega, itself inspired by Dietrich.

If that wasn’t ingenious enough, it so happens that a while ago, she got into a fight with something, needed seven stitches in her leg, and spent two weeks wearing a rather fetching white lampshade around her neck.

At that point, naturally, I took to calling her “Lily Marlene”, after the heroine of the wartime ballad (“Lily of the Lamplight”) which Dietrich sang.

I concede that “Maisie” has simplicity on its side and that, by contrast, I may be guilty of overthinking things.

On the other hand, I have TS Eliot in my corner. Here’s the opening verse of his poem on the subject: “The naming of cats is a difficult matter,/It isn’t just one of your holiday games;/You may think at first I am mad as a hatter/When I tell you a cat must have THREE DIFFERENT NAMES.”