Nigel Farage: Ireland should remember who its real friends are when Brexit comes

A time of choosing is quickly approaching when the Irish people, not just its political class, must act to protect their own interests 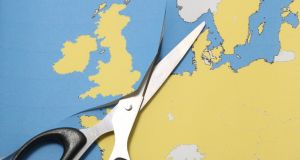 It is beyond doubt that the relations between Ireland and Great Britain are in the best shape they have been for over a century. Ties of language, family, history, free trade and free travel bind us together irrespective of any external factors such as the European Union.

Farmers, businesses and small traders do €1 billion worth of trade with the United Kingdom every week. So it is clearly in the interests of the Irish and British public that this free trade, travel and close relations continue and grow into the future. It is patently obvious that both Irish and British politicians want this situation to continue because it is mutually beneficial.

In 2009-2012, cheap credit of the euro currency and the mass migration of cheap labour from eastern Europe gave Ireland an almighty boom and bust. Who was Ireland’s friend at this devastating juncture?

While Britain immediately offered Ireland a sizeable interest-free loan, the EU on the other hand, unfairly imposed a €64 billion Franco-German bank debt on the Irish taxpayer.

Incredibly, this imposition from the EU happened with the collusion of Irish politicians who justified it by saying they were “taking one for the team”. Many of Ireland’s political class believe in putting the interests of the European Union above the interests of their own people.

That famous photograph of Nicolas Sarkozy grabbing Enda Kenny by the neck at a European Council summit in a way sums up the stranglehold that the EU has over Ireland’s political establishment.

Rather than standing up for the interests of the Irish people, politicians of Fianna Fáil, Fine Gael and Sinn Féin etc would rather be the lapdogs of their real masters in Brussels. That is why they have allowed over many decades Irish waters to be plundered of the wealth of their great fisheries, and they now stand idly by as the EU wishes to impose a Common Consolidated Corporate Tax Base which would devastate Ireland’s ability to collect tax from companies headquartered in the State.

This would cripple its economy and dramatically lower its tax take, thus undermining the funding of public services.

In June last year, 100 years on from 1916, the people of Britain struck for their freedom and voted to leave the EU’s political union because we want to make our own laws, spend our own money, act in our own interest and decide our own destiny.

A time of choosing is quickly approaching when the Irish people, not just its political class, must assess and act to protect their own interests. With Brexit, Ireland has an even greater financial imperative to leave the EU and agree a free trade agreement with Great Britain so that the smooth and full current arrangements continue into the future.

Both Irish and British governments want this to happen, and the only organisation standing in its way is the EU if it insists on imposing punitive trade tariffs or travel restrictions between our two countries.

It is beyond discussion, as I have recently stated, that it’s for all the people in the island of Ireland to decide their political relations between each other and Britain under the terms of the Belfast Agreement.

Is it now time for the people of Ireland to demand a referendum to decide whether they want to remain a member of the EU’s political union?

The EU is being stupidly provocative by interfering in the excellent relationship between Britain and Ireland. Its crude attempt to hamper Brexit risks fanning the flames of political violence over the Border and its constitutional settlement in Ireland. Nobody with any sense in either Britain or Ireland wants that to happen. The EU should butt out.

Minister for Social Protection Leo Varadkar, the guy who once said not one more cent of Irish taxpayers’ money would be paid to big banks, admitted while he was criticising me this week that the Irish Government is pro-European.

It is also true the Irish people have voted against EU treaties twice in the last 15 years and many Irish people are deeply Eurosceptic.

I understand the EU’s Michel Barnier is coming to visit Ireland next week: the question that you should ask him is, will the EU insist on imposing punitive tariffs on trade between the State and the UK? Will the EU insist on restricting travel and residency rights between British and Irish citizens, contrary to the wishes of both governments?

The Republic is now a net contributor to the EU budget. Given that it has suffered greatly from the euro, EU mass immigration and imposed bank debt in the last decade, is it now time for the people of Ireland to demand a referendum to decide whether they want to remain a member of the EU’s political union?

You cannot be a sovereign, independent, self-governing country while being a member of the EU. Cut free from the shackles of EU contributions, harmful EU regulations and being caught inside a customs union which prevents Ireland from making free trade deals with the rest of the world, the prize of self-governance awaits.

The people and government of Britain will be Ireland’s greatest ally as she seeks to extract herself from what is becoming an abusive relationship with the bully boys of Brussels.

How essential is chocolate?
Shared Island Unit is a distraction
Protecting Cork from flooding
When is a pudding not a pudding?
A definition of hypocrisy
Clockdown?
Bridge too far?
Helping the most marginalised in our global society
Electric bicycles and the law
Country distilling – the art of the wash

1 Deaths of father and sons may have been over disputed inheritance
2 Cork suspected murder-suicide may have been over disputed will
3 Suspected murder-suicide shooting in Cork leaves father and two sons dead
4 Don McLean: ‘My ex-wife is the worst person I ever knew’
5 Gardaí say 52 people who went missing in 2020 not yet found
Real news has value SUBSCRIBE