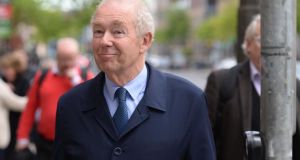 The National Maternity Hospital at Holles Street is one of Europe’s busiest, with more than 9,000 births each year. It is a national tertiary referral centre, meaning it receives patients from all around the country with complex pregnancies.

It operates from an unsuitable building, parts of which date from the 1700s. Several hundred patients each year need medical, surgical and diagnostic services available only in an adult hospital. Up to 10 women in critical condition – at risk of dying – are transferred each year from Holles Street to St Vincent’s Hospital, 3.5km away.

The relocation to the St Vincent’s campus at Elm Park will therefore be one of the State’s most vital healthcare developments and will benefit Irish women for decades. They will not be well-served by a perpetuation of unnecessary and unfounded negative public contributions regarding its viability. Unfortunately much of what has been said about this project in recent weeks has been, to put it mildly, inaccurate.

The Mulvey agreement to relocate the hospital was not a “secret deal”, as some have suggested. The mediation process was confidential, which is entirely normal, but the deal has been published, as the NMH wanted it to be.

The heads of agreement provide for the future drawing-up of detailed legal instruments putting it into effect. Repeated claims that the NMH governors have not given these final approval – including a claim to that effect by Dr Peter Boylan in last Saturday’s opinion piece in The Irish Times – are puzzling. Of course they haven’t: those legal instruments have not yet been finalised and the planning process is still under way.

The governors have been informed that a full briefing will be provided on all aspects of the project at this month’s agm. The board has already overwhelmingly approved the deal twice. When the legal instruments are prepared, these will be put to the board and the governors for approval. Contrary to what has been asserted, a draft of the memorandum and articles of association has indeed been prepared, which will be finalised on the creation of the new company.

The new company, as is now widely known, will have four directors nominated by the existing National Maternity Hospital, four by St Vincent’s, and there will be one independent director. That director will be an independent international expert in obstetrics who will be chosen from a list agreed between the two hospitals. Therefore the repeated assertion from a number of quarters that this director will give control of the new board to St Vincent’s – and act as some mere cipher of St Vincent’s – is both offensive and nonsense.

A more serious and inaccurate assertion was made by Dr Boylan in his opinion piece: that under the proposed new arrangements, “the role of the NMH board would, in fact, be limited to campus governance, such as estates and facilities management . . . the new NMH board would have no role in the clinical governance structure of the new maternity hospital . . . future masters have been relegated to the fourth tier of the of St Vincent’s management structure, with a dual reporting arrangement to both the group medical board medical executive and the SVHG clinical director, who reports to the SVHG chief executive, who will report to the St Vincent’s board of directors.”

This is as close to the direct opposite of an accurate summary as one can get. The NMH at no stage sought campus governance powers, which remain with SVHG. This is entirely logical when the new maternity hospital will form a segment only of the entire St Vincent’s campus. To suggest otherwise is counter-intuitive, illogical and wrong.

In the sometimes fevered agitation and speculation of recent weeks, many strange ideas and claims were advanced, including a suggestion that the NMH should at this late stage require the Government to serve a compulsory purchase order on lands owned by Elm Park Golf Club, build the new hospital there and connect it via tunnels to the existing hospital.

More familiar was the claim that the new hospital would be controlled by nuns. Despite the clear terms of the Mulvey agreement and repeated assurances that the new hospital would enjoy clinical independence and autonomy, the resistance to the project was largely driven by this claim. The recent announcement that the Sisters of Charity have been planning their withdrawal from Irish healthcare over the past two years further demonstrated that this claim was not correct. But even were the sisters to remain in healthcare, the new hospital had its clinical independence guaranteed.

The claim that the master of the NMH will report to St Vincent’s and not to the NMH board is also wrong. The master will be appointed by and report to the board of the new NMH company in relation to his or her role as master, not to St Vincent’s.

It is worth recalling that a few short weeks ago it was being argued in the media that it would be “naive” and indeed would “stretch credibility to breaking point” to believe the new hospital would allow contraception, sterilisation, gender reassignment surgery and abortion. These claims were unfounded, but they caused huge anxiety and distress.

These latest claims, although mistaken, also have the capacity to cause further unnecessary concern. Is this what people want? The boards of both hospitals believe that this country wants this hospital to be built now. I encourage all who put the interests of women and babies first to put past differences aside and support this vital new hospital project.

Nicholas Kearns is the deputy chairman of the National Maternity Hospital

1 SuperValu and Centra MD Martin Kelleher stepping down
2 Skeletal remains discovered in south Dublin were of man missing for 10 years
3 Coronavirus: One more death and 24 new cases reported in the Republic
4 239 experts with one big claim: Coronavirus is airborne
5 Attempt to force Barry Cowen to answer questions after Dáil statement defeated
Real news has value SUBSCRIBE