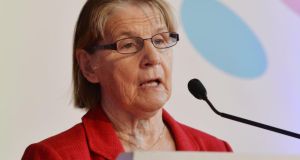 The depiction of the Sisters of Charity during the recent controversy over the transfer of the National Maternity Hospital to St Vincent’s hospital was akin to elder abuse, according to one of the order’s best-known members.

Sr Stanislaus Kennedy said she was shocked and surprised by the scale of the controversy over St Vincent’s and the criticisms levelled at her order. “It shook me, it really did.”

During the controversy, very little thought was given to the background of the Sisters of Charity and the work its members had done over the years, she said.

“A lot of the stuff that came out in the media about us was very hurtful. There was a lot of misunderstanding and misrepresentation. It was very distasteful.”

Sr Stanislaus, the founder of Focus Ireland and the Immigrant Council of Ireland, said her order had been depicted as “a power-grabbing congregation” and “a group of old ladies who didn’t know what they were doing”.

“In another context, this would come under elder abuse,” said the 78-year-old nun.

The controversy was sparked by the revelation last month that the Sisters of Charity would own the National Maternity Hospital when it moved from Holles Street to St Vincent’s because it owns the wider campus. Critics claimed the State was “gifting” the new facility to the order, which could have undue influence on the maternity hospital.

However, last Monday, the order announced it was withdrawing completely from St Vincent’s and would therefore have no involvement in the NMH when it moves.

Minister for Health Simon Harris will next week tell Cabinet his plans for the €300 million project, which is fully supported by both hospitals.

Sr Stanislaus pointed out that Sisters of Charity has a long-term record of giving properties away. Thirty years ago, it led the way for other orders by providing Stanhope Street convent in central Dublin for use as housing for the homeless.

The order had also provided properties at the North Circular Road, Richmond Road, Harold’s Cross and Baldoyle in Dublin, and in Cork and Waterford, for housing and other charitable purposes.

We are a hard-working, humble congregation that did its work for years without much notice

The order gave “quietly, without bells and whistles” but fulfilled what it set out to do in terms of honouring the aims of its founders, Sr Mary Aikenhead, she said. “We are a hard-working, humble congregation that did its work for years without much notice.”

Sr Stanislaus said she knew nuns working in St Vincent’s who had given their lives for the needs of the powerless. “I might be better-known in the media, but I couldn’t hold a candle to these colleagues in terms of lifelong dedication.”

Asked whether the order should have done more to put its point of view across, Sr Stanislaus said she could understand why the Sisters would not want to go before “the barrage of the media”.

Although she was not involved in the discussions about withdrawing from St Vincent’s, she said she was aware “for a number of years” this was under discussion.

Asked whether complete withdrawal had been contemplated, or whether this was a response to the controversy, she said: “I think we would have withdrawn anyway. That was the plan.”

Supreme Court sends Denham report on Seamus Woulfe to Judicial Council 15:11
North: 424 new cases of coronavirus in highest rate since start of pandemic 15:06
Lack of housing is greatest barrier for homeless people going back to work - study 14:53
High Court action over Leaving Cert grades to be heard on October 21st 14:33
Thousands may get upgrades as errors in Leaving Cert calculated grades system identified 14:21

1 Thousands may get upgrades as errors in Leaving Cert calculated grades system identified
2 US presidential debate: who won, was it any good, were there any surprises?
3 Dublin needs ‘significant improvement’ in Covid case numbers, Oireachtas committee hears
4 CPE superbug being detected at record levels, says HSE
5 US election: Joe Biden and Donald Trump clash in chaotic presidential debate
Real news has value SUBSCRIBE