Newton Emerson: Stormont’s last collapse a warning of its next 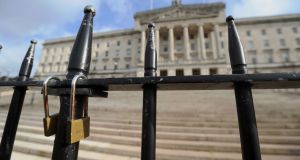 No prizes for guessing what the DUP and Sinn Féin will ask for in return for a devolution deal. Photograph: Niall Carson/PA Wire

The three-year collapse of Stormont has caused people to forget its previous three-year de facto collapse, between 2012 and 2015. But the central dispute from that earlier period has resurfaced with a vengeance in the current general election campaign. This bodes ill for the restoration of devolution, tentatively expected in the first half of next year.

Introducing UK-wide welfare reforms to Northern Ireland caused Sinn Féin to effectively go on strike from 2012, bringing executive business to a halt. Two talks processes failed to clear the deadlock. In 2015, the DUP threatened to walk out and cause an actual collapse. The matter was finally resolved in the Fresh Start agreement, where the DUP, Sinn Féin and Alliance voted to hand welfare powers back to Westminster and let the British government impose reform, in return for a £585 million four-year mitigation package to protect and prepare benefit claimants in Northern Ireland.

1 Fianna Fáil may have just pressed the pause button on the property market
2 UK to prioritise EU trade deal over one with United States
3 Eating out in Dublin – the homeless way
4 Independent TD Tommy Broughan announces retirement from Dáil
5 Which jobs do teenage girls and boys aspire to have by age 30?
6 Who are Ireland’s 17 billionaires?
7 Election 2020: 10 key questions to ask candidates on your doorstep
8 Gordon D’Arcy: There’s more to Saracens’ success than money
9 Election 2020: Peter Casey to stand in both Donegal and Dublin West
10 ‘I am dating a minor celebrity and I don’t like the extra attention’
11 Irish Times poll: Large majority want change of government
12 Mary Lou McDonald upset by SF councillor’s ‘vile’ comments
13 Ireland’s favourite takeaway revealed
14 Terry Jones, Monty Python star, dies at the age of 77
15 Maria Bailey announces she will not stand for re-election
16 A vegetarian and a non-drinker visit Ireland: here’s their verdict
17 DUP and Sinn Féin seek to reject ‘unjustifiable’ pay rise
18 Is Ireland moving left or simply moving on?
19 Fears of pandemic grow as coronavirus spreads beyond China
20 Dunnes premature in challenging Point Village resolution move, Supreme Court finds
21 Banish January Face with these hardworking skincare products
22 ‘In Ireland I’ve found another form of persecution’
23 52 places to go in 2020: Here’s where the New York Times says you should visit
24 Miriam Lord: Greens take to the beach as signs emerge of a rising tide
25 Saudi prince’s WhatsApp account ‘directly involved’ in Bezos hack
26 Spice bag: How to make Ireland’s favourite takeaway dish at home
27 The Personal History of David Copperfield: Armando Iannucci delivers a minor miracle
28 I have been increasingly fielding questions about marriage
29 Are there annual limits on inheritances or gifts to a child?
30 European investor acquires Harcourt Road offices for €55m
31 Election 2020: Today is the last day to register to vote
32 My father in a nursing home wants to gift me his house
33 Find out if your local TD is a landlord or owns multiple properties
34 Media firms lose appeal over reporting restrictions order in sexual assault case
35 Do Irish people hate babies? Our irritation with them is embedded in our culture
36 Seán Moran: Total disregard for schools as GAA votes one way and acts in another
37 Protein powders: What are they and do they work?
38 Dublin International Film Festival: A guide to the best movies
39 Corporate tax change is inevitable, says Donohoe
40 Election 2020: All you need to know about the upcoming general election
Real news has value SUBSCRIBE