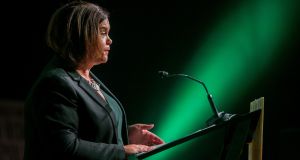 Sinn Féin leader Mary Lou McDonald: Fine Gael, Fianna Fáil and Labour are campaigning on the insistence they will not share power with a party that takes orders from the IRA. Photograph: Gareth Chaney/Collins

Ruling Sinn Féin out of coalition in the Republic contributes to political infantilisation at Stormont. That might be a price worth paying but it is a cost that is never discussed.

There was a theory among members of the Social Democratic and Labour Party (SDLP) in the early years of the Belfast Agreement that putting Sinn Féin in government in Northern Ireland would halt its rise. Forced to stand over real-world policy choices instead of making wild promises and complaints from the sidelines, it would become subject to the same democratic pendulum as everyone else.

A more positive version of this theory was developed by London and Dublin in the 2006 St Andrews Agreement, when it was hoped the responsibilities of office would force Sinn Féin to grow into the role.

Stormont is more of a grandiose council than a government, however, and Sinn Féin proved adept at avoiding hard policy choices. It floated into office after St Andrews on a wave of cash that merely had to be spent. When a welfare reform issue arose in 2012, it effectively went on strike for three years until more UK cash was forthcoming. Now it is back after another three-year absence, during which its minister for health was supposed to rationalise hospitals. This time the money available is not enough to avoid tax rises or spending cuts, but Sinn Féin has ruled them out anyway and only has to hold this position for three weeks before the Republic goes to the polls.

After that, it could finally move beyond pain-free populism and deliver urgent reforms. The likelier outcome is that it will do nothing, blame “Tory austerity” and fall back into a republican comfort zone of portraying Northern Ireland as a failed state. The moment of truth in government for Sinn Féin has not yet arrived, nor is it certain to any time soon.

The role the Republic plays in this goes beyond its main parties barring Sinn Féin from coalition. Southern voters may pay little attention to Stormont but Sinn Féin remains extremely sensitive about taking any decisions there that could be used against it by southern rivals. That is why the welfare reform crisis occurred and dragged on for so long – it was a period when a general election in the Republic always seemed to be months away.

The return of devolution has been driven by electoral pressure over fraying public services, particularly health. Decisions that would challenge any political system must be taken, but with similar problems in the Republic, Sinn Féin has a southern electoral imperative not to take them. Health reform is considered the key test of the new executive and a last chance to show devolution works. If the executive falls apart over it, which is entirely possible, the Belfast Agreement will have to be replaced or substantially rewritten, with all the risk and effort that entails.

The contradiction in Sinn Féin’s spinelessness over bread-and-butter politics is the courage it has shown in culling republican sacred cows. From accepting the consent principle on Northern Ireland’s existence to telling Irish language activists last month to settle for less than they wanted, the party is capable of far harder acts of leadership than rebalancing Stormont’s budget. However, it can portray these as steps towards unification. Compromises on left-wing economic and social policies are just steps towards the crowded centre ground of Irish politics.

Sinn Féin has told its supporters being in power on both sides of the Border is a crucial milestone in unification and the reason for entering Stormont in the first place. Southern office is the prize, while northern office is all but guaranteed.

If the moment of truth is going to arrive anywhere, it may have to be in Dublin first

So why court any unpopularity through difficult decisions in Belfast? If the moment of truth is going to arrive anywhere, it may have to be in Dublin first.

Fine Gael, Fianna Fáil and Labour are campaigning on the insistence they will not share power with a party that takes orders from the IRA. The usual question this raises in Northern Ireland is why Sinn Féin is good enough on one side of the Border but beyond the Pale on the other. Even some unionists find the double-standard offensive, although not through any love of republicans in government.

But a devolved regional executive is obviously different from a sovereign nation’s cabinet, and there is an air of historic inevitability about the Republic digesting another slightly constitutional party, albeit at its own pace.

The question is what can be done for Stormont in the meantime. It is not enough to restore devolution while leaving Sinn Féin locked in all-Ireland opposition mode. Should other parties in the Republic set out what policy actions in the North would make it a more acceptable partner in the South?

1 Rape victim verbally abused in courtroom after two men are jailed
2 Paraic O’Donnell: MS is meticulously destroying me. I am being unmade
3 Former UUP leader: Unionism must realise it is no longer a majority in Northern Ireland
4 Dancing with the Stars has hit Father Ted levels of farce
5 Revealed: Where to find Ireland’s best breakfasts and brunches
Real news has value SUBSCRIBE