Diarmaid Ferriter: Allow me a little crib about Christmas cribs 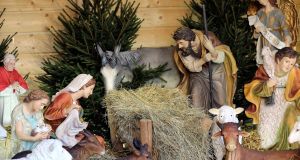 A Christmas crib at the Jasna Gora Monastery in southern Poland. Filling the crib has long been controversial. Photograph: Waldemar Deska/EPA

Thankfully there are still a few Bishops who like to point out our errant Christmas practices. Church of Ireland Bishop of Cashel Michael Burrows reminded us during the week of the correct sequence for the populating of the Christmas nativity scenes; only animals, manger and hay up to Christmas Eve, when Mary and Joseph arrive; then baby Jesus followed by the shepherds, and there should be no sign of the wise men until the Epiphany on January 6th. If you have an overpopulated crib this weekend it is time to scale it back. Chickens, goats and all other impostors need to be evicted forthwith.

Filling the crib has long been controversial. On Christmas Eve in 1968, seven dwarfs, two reindeer and a golden coach disappeared from under Belfast’s civic Christmas tree at the city hall. This happened in the midst of some ill feeling over the city council’s refusal to have a traditional nativity scene. It was reported “Critics have attacked the council’s apparent preference for figures from a Pagan myth”. Maybe the dwarfs recognised the errors of the council’s ways and took it on themselves to scarper; they certainly had the advantage of an obvious getaway with the coach and reindeers. Or maybe they got fed up waiting for Snow White and decided to try to track her down.

Joseph J Kavanagh, an American Jesuit, observed in 1953 “it is a queer quirk of our modern artists that they seem to wish to vindicate the rights of the animals. In their creations, the child is evicted from the centre of the scene and the animals are led back to their ‘rightful place’ . . . the most appropriate decoration for the Christmas season seems to be now, not Christ, from whom the holiday takes its name, but animals – a reindeer, or a bowlegged duck or a likeable little puppy dog . . . and the reason is, of course, that so many Moderns have ceased to believe really, that the Child is the son of God . . . customs may have grown up among even the best of our Catholic families which, instead of helping to celebrate the birth of Christ, distract from him. At Christmas time we can be so happy as to forget the real reason for our happiness.”

In 1966, the Catholic Archbishop of Dublin, John Charles McQuaid, was not at all happy about the crib in the Church of Our Lady Queen of Heaven, opposite the main entrance to Dublin Airport, which McQuaid had dedicated just the previous summer. The crib contained 10 carved wooden figures by the sculptor Fergus O’Farrell. Contemporary reports referred to them as “a complete break with tradition”, while O’Farrell described them as “pure, basic shapes . . . I endeavoured to make people search within themselves for their own image”. He wanted to avoid the Gothic, Florentine and Spanish styles most associated with cribs. The crib was removed after a visit from McQuaid; that amounted to more than a belt of the crozier; it was more like a full crushing. A subsequent statement from the Archbishop’s House declared that the crib figures were not only “beneath the level of human dignity in that they were not human”, but also “it was an offence against Canon Law and the proscriptions of the Holy See to propose for public veneration figures purporting to be sacred without the previous sanction of the Archbishop”.

McQuaid was not one to mince his words, at Christmas or any other time of year; nor did he like his flock to do the searching for themselves.

We ultra Moderns are even worse. Last year, a science fiction writer in Louisiana placed a dragon nativity scene in her front garden with three inflatable dragons and a glowing dragon egg. She received a note from a neighbour who, hardly unfairly, suggested: “Your dragon display is only marginally acceptable at Halloween. It is totally inappropriate at Christmas. It makes your neighbours wonder if you are involved in a demonic cult. Please consider removing the dragons. May God Bless you and help you to know the true meaning of Christmas.”

But perhaps the most bizarre and distasteful thing relating to Christmas scene-setting was what I read about on a recent trip to New York. Kentucky Fried Chicken has released a branded log for Christmas designed to create a “warm fried chicken-scented fire” on the hearth. The logs are on sale at Walmart for $18.99. KFC’s marketing officer hopes “you’ll cuddle up with your family or friends with a bucket of our world-famous fried chicken and a warm fried-chicken scented fire this holiday season”.

Have you ever read worse? KFC also offered a scented candle in the past that smelled like gravy. I suspect even a bishop would prefer an overpopulated, badly sequenced nativity scene – even one full of pagan dwarfs – than to give his blessing to a festive KFC log.