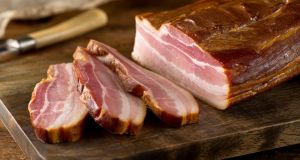 “The mission involved sending a party of Limerick pork butchers and bricklayers to Russia in 1891 to build and staff curing houses at Gryazi, 250 miles southeast of Moscow.”

Writing about Kate O’Brien last week, I mentioned her confidante and brother-in-law Stephen O’Mara, the “Clongowes-educated scion of a Limerick bacon empire”. Now I find that the word “empire” there may have been more apt than I thought. Certainly, it evoked interesting memories for John McEntee, a veteran of London’s Fleet Street, of his earlier career as a roving reporter in Ireland in the 1970s.

The O’Mara bacon empire was not historically confined to Limerick, it turns out. Back in the 1890s, it extended to Tsarist Russia, where the O’Maras acquired rights to the Russian Bacon Company – a 21-year concession granted by the state – and set up operation there. The mission involved sending a party of Limerick pork butchers and bricklayers to Russia in 1891 to build and staff curing houses at Gryazi, 250 miles southeast of Moscow.

This opening of an eastern front in the global bacon industry made news as far away as the American Midwest.  Under the headline “Not Afraid of Russia”, for example, the Indianapolis Journal quoted a bacon producer in that city braving it out in the face of a threat to US exports in Europe.

“The story that fifteen practical dressers have been sent to Russia to cut up pork ought to carry with it no more weight than that 15 men had been sent to the Congo to raise corn,” he scoffed.

But another industry representative sounded more impressed. “The experienced dressers or cutters they have there are Irishmen from the city of Limerick, and they are thoroughly capable men,” he admitted.

On the plus side, from a US point of view, there was the weather. “The Limerick men are not fond of Russian winters with snow four or five feet deep,” he continued. And then there was the question of transport. The new plant was “about 800 miles from the nearest Baltic port, Riga”. Yes, there were railway connections: “But they have not the facilities for [carrying] large quantities of hogs as we have in this country, and it will be years before they [do].”

How successful the Hiberno-Russian bacon operation was I’m not sure. It seems to have ended earlier than planned, circa 1903.

But when the aforementioned McEntee and Sunday Press photographer Ronan Quinlan fetched up in O’Mara’s Limerick factory seven decades later, they were amazed to find descendants of those Russian missionaries still working there and proud of the heritage: “They posed for Ronan’s photograph holding their grandfathers’ elaborate passports […] broadsheet-sized parchments stamped by Queen Victoria’s foreign or overseas secretary [granting] passage through Europe and on to Russia by train.”

The sun was setting on the O’Maras’ empire by then – the factory closed in the 1980s, after 150 years. But it had long outlived the tsar’s. And the story of the Russian Bacon Company reminds me in turn of one of the more colourful tales about Kate O’Brien: that at an Irish fundraising dinner in the US, circa 1921, she wore as her accessories some of the Russian crown jewels.

This would have been entirely possible. Like Russia’s former aristocracy, the imperial jewellery had fallen on hard times under the Bolsheviks.  Some was offered for sale in the west to raise money for the new regime. In the meantime, other revolutionaries – from Ireland, including Éamon de Valera – were also seeking funds in America, somewhat more successfully.

After a meeting with Russian representatives, that were able to advance them a $20,000 dollar loan in return for a number of jewelled brooches, which were brought back to Ireland by Harry Boland.

But after the Civil War intervened, the jewels then spent years hidden in a chimney of the Bolands’ house in Marino, before the government finally returned them to the Soviet Union in the 1940s.  They had proven to be a lot less valuable than the loan, which was in turn paid back then, without interest.

Anyway, one of Kate O’Brien’s earliest jobs after graduating had been to act as secretary to the Irish US delegation. So it seems quite plausible that, as they all strove to present a positive image of the new Ireland, she might well have worn some of the loan collateral at a dinner.

Getting back to John McEntee in 1970s Limerick, however, he returned to Dublin – and another of de Valera’s missions, The Press Group – with a rather different kind of treasure. The boss of the bacon empire had been “exceedingly charming,” he recalls. “Sadly, more vividly branded in my memory are the jumbo parcels of bacon, sausages and white pudding given to myself and Ronan on our departure and Ronan leaving his loot festering for a week in the back of the VW behind Burgh Quay.”