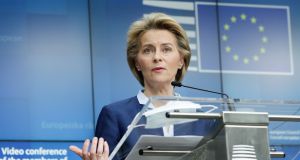 Covid-19 has not only caused the biggest peacetime economic collapse in at least 150 years, but also takes place in the shadow of growing climate and biodiversity crises that – if left unchecked – threaten even greater suffering and disruption. It makes sense therefore to accelerate the green transition to support a recovery from Covid-19.

When European Commission president Ursula von der Leyen unveiled the “European green deal” in December 2019, she heralded it as Europe’s “man-on-the-moon” moment, a reference to US president John F Kennedy’s famous 1961 moonshot promise. The analogy was no exaggeration, though making Europe the first carbon-neutral continent by 2050 may require an even greater transformation of our organisational and technological capabilities.

If Kennedy inspires us to believe in the power of human effort to achieve seemingly impossible dreams, then perhaps another US president, Franklin Delano Roosevelt, shows us how to pay for them.

Roosevelt’s “New Deal” was a series of programmes in the 1930s to fight the Great Depression. At a time – like now – of collapsing private investment and tax revenues, it included the first large-scale, non-wartime, borrowing by the US federal government, which was used to finance, among other things, 35,000 labour-intensive public works and infrastructure projects, such as the Hoover Dam, to help put the country back to work and modernise its infrastructure.

With interest rates at record lows, there could not be a better time to borrow

To support a recovery, the EU budget will, in this way, redistribute spending power not just across borders but also across time. Outstanding debt issuance by the EU could rise from about €50 billion today to well above €800 billion by 2024, to be paid back only after 2028 by new EU-level taxes. With interest rates at record lows, there could not be a better time to borrow. And if combined with an expansion of the European Investment Banks’s €550 billion balance sheet, this would offer over the coming years a badly needed EU stimulus to help the recovery, while easing the growing burden on overindebted member states.

There will, naturally, be intensive negotiations between member states on the details, including the so-called “allocation key” – the formula proposed by the commission to decide which countries should – in light of Covid-19 – benefit most from the extra resources.

But not to be overlooked in these negotiations is how the commission’s new plan also has the potential to accelerate the green transition across every part of Europe, in a number of ways.

First, the €560 billion in grants and cheap loans for “recovery and resilience” plans in every member state can be used by cash-strapped governments to finance low-carbon modes of transport, better digital infrastructure and the upgrading of our housing and public buildings to provide greater comfort and to consume less energy.

To be clear, the commission’s recovery plan – and its reinforcement of the European green deal – is not a quick fix for the Covid-19 economic crisis

Secondly, the proposed €60 billion increase in the guarantees from the EU budget will be used by the EIB to finance higher-risk private investments, notably in renewable energy (such as offshore wind), e-mobility, energy efficiency and new clean-energy technologies such as floating wind, batteries and hydrogen. When fully leveraged at EIB and project level, this could support more than €1 trillion in private investments.

Thirdly, the just transition fund, established to help vulnerable regions such as the Irish midlands to replace jobs lost as a result of the energy transition, will be quadrupled to €40 billion. These funds will be crucial in mitigating the uneven distributional consequences of the energy transition and securing the necessary social and political consent for the big changes ahead.

Finally, the previously agreed modernisation and innovation funds – financed by sales by the EIB of carbon allowances allocated from the emissions trading system – will, at current allowance prices, provide almost €30 billion in subsidies for energy transition and new clean-energy innovation projects.

As the EU bank, the EIB will play a leading role in supporting both the recovery plan and the European green deal. By 2025, at least half of our new loans will finance climate and environmental projects. We will also become the first multilateral institution to stop financing any investments, including natural gas, inconsistent with the Paris climate agreement and 2050 carbon neutrality.

Many of our shareholders have asked us to do even more, and indeed France, as well as the European Council president Charles Michel, have recently proposed a significant capital increase for the EIB to further strengthen our role in financing a green recovery.

To be clear, the commission’s recovery plan – and its reinforcement of the European green deal – is not a quick fix for the Covid-19 economic crisis. And it is right that the member states now have the opportunity to understand the technicalities and improve the package.

But if adopted close to its current form, the plan will not only start us down the long road of rebuilding a more sustainable and fairer European economy, but will also remind us, and the world, that this generation of Europeans still has the political will and – through the EU – the means to achieve impossible dreams.

Andrew McDowell is vice-president of the European Investment Bank.