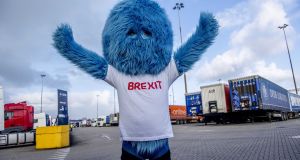 There is a deliberate infantilisation of the British public who were not told about the real effects of Brexit in 2016 and who are still being misled about the relationship between their Brexit vote and the consequences they are now beginning to experience. Photograph: Robin Utrecht

Sometimes our vocabulary has to expand to encompass new realities. Covid, for example, has added “lockdown”, “social distancing” and “flattening the curve” to our daily lexicon. Likewise, the UK’s departure from the European Union has already given us words such as “Remainers”, “Leavers” and “cake-ism” as well as, of course, the word “Brexit” itself. Phrases about “unicorns” and “cherry-picking” have been given a new resonance.

But Brexit, set to take full effect on January 1st, now requires the urgent invention of another word to capture the simple reality that the self-harm inflicted on the British people, across so many areas of their lives, is the direct effect of Brexit itself and of the hard version of it pursued by the Johnson government. Many people, of course, understand this well both in Britain and around Europe. But if this elementary reality has to be explained every time that British tabloids express astonishment at the latest materialisation of the bleeding obvious, we may lose the will to live.

For example, in recent days alone, the British public has been informed, shock horror, that British ski instructors are set to lose their seasonal jobs on the continent, that British owners of second-houses in Europe will only be able to reside there for a limited period every year, and that European spouses of British citizens will no longer have an automatic right to reside in the UK.

Stories like these are merely a tiny tip of the massive Brexit iceberg that is floating in the direction of the British public. Just wait until long lines of traffic are approaching British ports and lengthy queues at European airports are growing tetchy, not to mention the thousand other Brexit “shocks that flesh is heir to”.

Sky is falling down

It would be unfair to our forests to cut down enough trees to explain in response to each and every cry that the sky is falling down that, on a particular day in 2016, a majority of British voters voted for that very sky to fall down; or that, in the UK general election last December, a prime minister who was insouciant about maximising the damage was given a parliamentary majority.

So here is my modest proposal. We should agree on a single word we can use to set the record straight, in jig time, whenever it is implied that the consequences of Brexit are as mysterious as the Third Secret of Fatima or as inexplicable as the changing seasons were to our Neanderthal forebears. The new phenomenon that the word needs to capture is Rejecting All Brexit’s Inevitable Effects Syndrome. The acronym may work better: Rabies.

I do not mean to imply for a moment that most Brexiteers are mad, even if many people, including in the UK, would be more comfortable if a few of the more pop-eyed Brexit cheerleaders were to self-isolate for a few decades. Still less do I wish for anything negative to happen to the British people, my affection for whom significantly inspires my contribution to public debate. I hope that the damaging effects of Brexit for them can be minimised.

But I am concerned about the deliberate infantilisation of the British public who were not told about the real effects of Brexit in 2016 and who are still being misled, on a daily basis, about the relationship between their own Brexit vote and the inevitable consequences which they and their families and friends are now beginning to experience. The implied message of some tabloid headlines seems to be “Never saw it coming, mate”. Of course, the next step, already under way, is to blame others for the damaging effects of Brexit; after all, if the effects were not inevitable someone else must be to blame. True followers of the One True Brexit Faith are convinced that Brexit should have been an unqualified rip-roaring success; their quest to find scapegoats for the inevitable long-term damage they have inflicted on their country will be unrelenting.

A tragic reverse symmetry can be observed in today’s denial of what Brexit actually means. Several decades ago, the now British prime minister, as a journalist in Brussels, invented for the British public an entirely fictional European Union of straight bananas and scheming European bureaucrats plotting to get rid of prawn-flavoured crisps. The EU that the British people voted to leave was therefore not the real one but rather a clever figment of Johnson’s imagination. Today the British people are finding that the EU they actually did leave, at Johnson’s urging, is in fact a real one in which British citizens used to have important rights of employment, travel and residence.

I regret the impact that Brexit will have on our British friends. But I suspect the word Rabies could come in increasingly handy.