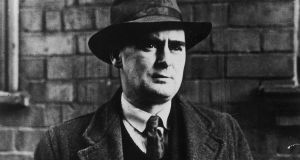 In the “Diary” column of the London Times on Thursday, there was a finely wrought pun that, while amusing, seemed oddly familiar. It involved the current, penurious state of the British exchequer but harked back to the 2010 crisis and a note left by the outgoing treasury secretary, Labour’s Liam Byrne, to his successor: “I’m afraid there is no money, good luck.”

This private joke was subsequently publicised by George Osborne, to Labour’s embarrassment, in the process ending the tradition of such notes. And Byrne recalled it ruefully this week while campaigning to quit Westminster and become mayor of the West Midlands. Hence the Times’s joke that the latest Tory chancellor would be left, “like a fiscal Nero, to fiddle as Byrne roams”.

A version of this, I felt sure, had also been one of the punch lines of Myles na gCopaleen’s famous Keats & Chapman series in this newspaper. So I went searching the archive and, sure enough, found that Myles had been so fond of the pun he used it on at least three occasions. The first was in 1941 when it was the sole English line in a column otherwise in Irish. The second was in 1954, where it had escalated into an international context involving the first prime minister of India and James F Byrnes, US secretary of state during the Paris Peace Conference. In that case, the joke was that “Nehru [had] fiddled while Byrnes roamed”. Then came a 1957 column, in which the line was even more preposterously revived, via film star Yul Brynner.

Curiously, on none of those occasions were Keats and Chapman at the crime scene. But while looking for their fingerprints, I noticed it wasn’t only Myles who used this pun.  It had also been deployed once by a mysterious figure named “Zozimus Muldowney”, whose sole contribution to Irish public life appears to have been a letter to this paper in March 1947.

That in turn may shed light on an ongoing literary mystery, much studied in recent years: the extent of the pseudo-correspondence engaged in by the real-life Myles, Brian O’Nolan. It’s well known that O’Nolan launched his literary career with fake letters to The Irish Times. That’s how his novel-writing pseudonym, “Flann O’Brien”, made its debut. And there was a plethora of other names associated with him too, including “Lir O’Connor” and “Oscar Love”.

Except that, as Maebh Long noted in her Collected Letters of Flann O’Brien (2018), Oscar Love turned out to be a real person. And even where the names were invented, there may have been real people other than Myles behind them. In that context, Long cited Dr Alfred Byrne, a former Irish Times medical correspondent and friend of O’Nolan’s, who later confessed involvement.

Well, it turns out that this same medical correspondent was the Byrne mentioned in Zozimus Muldowney’s version of the pun, which occurred during an extraordinary 1947 exchange of letters on the subject of Thomas Moore.

The row began in February with an article by “A.T. Byrne”, which argued that the “Bard of Erin” had been nothing more a writer of trite verse, the only virtue of which was to immortalise the old Irish airs to which he set it. This sparked an epistolary war, which raged throughout March, with Moore’s defence led by a “Captain Seamus McCall”, whose novella-length riposte turned the attack on Byrne.

Two weeks later, Muldowney’s letter summed up for the prosecution of the “Great Auk of Aungier Street”, with shafts of wit strongly suggestive of Myles although it may have been Byrne himself. At any rate, the writer must have seen the original of one anti-Byrne diatribe because he notes it was dated March 6th, while praising McCall’s letter in the March 8th edition, suggesting “somebody, somewhere, had been fiddling while Byrne roamed”.

Whether Muldowney was O’Nolan, Byrne, or a third party is unknown. But he may at least shine a light on Lir O’Connor. O’Connor is still “generally considered to be one of O’Nolan’s pseudonyms”, as Long wrote, while adding a note of caution. And the caution was sensible, because when searching for the pun, I also found it (via Muldowney) in An Irishman’s Diary of 1971, written after Byrne’s death.

Praising the “comic imp” that lurked behind the medical man, the diarist declared that Byrne had been the Lir O’Connor of the letters, that he had published under the name elsewhere, and that had once also attached it to a feature intended for The Bell magazine. The piece was entitled “How to be a successful young doctor in Dublin”. Unfortunately, added the diarist, it “was so savagely satirical, it never got beyond the galley-proof stage”.