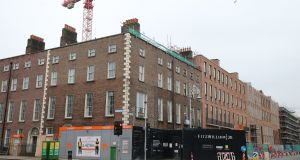 The pandemic has delayed the removal of the final remnants of scaffolding at the ESB’s redevelopment of Lower Fitzwilliam Street. However, with most of the scaffolding gone, the reality of what has replaced Sam Stephenson’s awful planning blunder is becoming apparent.

In essence, a massive office block has been constructed behind a screen of brickwork which, to varying degrees, echoes some of the characteristics of Dublin’s Georgian street facades.

In my view, what is emerging is a monument to architectural and town planning failure. While some may say that it could have been worse (and having considered some of the scary alternatives contemplated by the ESB I can confirm that), a huge opportunity was lost to redress the damage done by the ESB with the active encouragement of Kevin Boland, a former minister who despised the colonial architecture of “belted earls”.

This could have been avoided. When a councillor, Jim O’Callaghan, succeeded in having restoration of the Fitzwilliam Street facade made a planning objective in Dublin city’s development plan.

The ESB, a powerful institution, lobbied against that objective and had it removed. While some architectural purists may oppose facade-ism, I would have favoured the reconstruction of a series of buildings of Georgian proportions externally on the site so as to recreate Dublin’s longest stretch of Georgian buildings from Mount Street to Leeson Street.

We live in an architectural tyranny in which all forms of facade-ism or reinstatements of earlier styles stand suspect as pastiche. The architectural magisterium regards conscious reversion to previous architectural forms as moral anathema. Reversion to such forms is, in some sense, seen as a betrayal of fundamental dogma, including the correspondence of form with function, distrust of decoration, and unqualified espousal of modern materials and styles wherever possible.

We really are planning for dysfunction, ugliness and alienation. We need a real debate on this

These dogmas are deeply problematical. Owners of an infill site in a terrace of artisan dwellings in the northwest inner city were actually required, as a condition of planning permission, to build a house which contrasted with rather than replicated their neighbours’ homes. The same dogma expresses itself in the facades of discordant domestic extensions all over the city.

It seems to me that there is nothing inherently wrong with high-quality facade-ism in certain cases. One only has to look at an aerial photograph of the old Parliament House complex at College Green to understand that the classical facade of the building bears little or no functional relationship to what lies behind and, indeed, was effectively intended as a highly decorative screen for plain functional structures concealed to its rear. Was 18th-century facade-ism of this kind not analogous to what is condemned in the 21st century as pastiche?

None of this is to suggest that it is or was legitimate to knock down Dublin’s Georgian heritage and build modern office blocks behind replica facades. It is only to make the point that where Georgian areas already exist, any redevelopment that must, for some reason or another, occur can quite properly entail the reinstatement of facades that recreate 18th-century streetscapes.

I am not pointing to the famous Hume Street compromise (which by the way isn’t visually the worst); rather would I point to the newly rebuilt portions of Mountjoy Square and, say, the major building at the corner of Fitzwilliam Square North and Lower Pembroke Street.

A much broader but related point is the whole question of positive streetscape planning in the redevelopment of whole swathes of Dublin city.

It seems as if the powers that be in the Custom House and Wood Quay simply do not understand how to harness 21st-century development in Dublin as part of a process to make our capital a beautiful, liveable city. That process cannot be left to individual developers building what they like on whatever sites they can individually assemble. No decent city in the last 500 years was ever built by haphazard impulses of unco-ordinated market forces.

The Land Development Agency Bill proposes a further step in emasculation of the planning function of elected members of local authorities. Soon all decisions will be made by their unelected managements and/or by an Bord Pleanála using strategic housing development powers.

We really are planning for dysfunction, ugliness and alienation. We need a real debate on this.