Challenges ahead for the Archbishop of Dublin 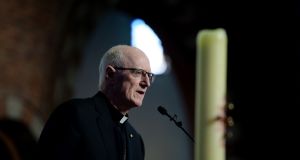 The new archbishop of Dublin, Dermot Farrell, does not believe in the model of the lone ranger. Photograph: Alan Betson / The Irish Times

The challenges facing the new archbishop of Dublin, Dermot Farrell, scarcely need rehearsing: dwindling numbers of both laity and clergy; a couple of decades of scandals which have eroded the church’s credibility; a financial crisis; a rapidly secularising society; a global pandemic and its aftermath.

Even the circumstances of the archbishop’s installation were odd, taking place in the echoing emptiness of the Pro-cathedral complete with face masks and social distancing.

There are indicators as to how the new archbishop will tackle these challenges in what he has said and done to date. For example, in an Irish Catholic interview with Michael Kelly, the archbishop said that he does not believe in the model of the lone ranger, focusing instead on having “the right team of people to explore things” and the importance of listening.

This seems to have been the approach he took in his previous appointment as Bishop of Ossory. According to those who know him (I do not) he did the same during his long years as parish priest of Dunboyne.

He does not appear to fear tackling daunting challenges. In Ossory in 2019,  approximately 24 per cent of Catholics attended mass but there were 142 Masses in 42 parishes and 89 churches attended by approximately 18,500 people. This was obviously unsustainable, particularly since there were only 40 priests under the age of 75. He began a process of consultation with parish councils and priests which led to major reorganisation and reduced the number of masses to 90.

The challenges facing the Archdiocese of Dublin are even greater. There are 197 parishes with 350 active priests with an average age of 70.

The archbishop seems acutely aware, to use a morose phrase of a clerical friend of mine, that any reorganisation cannot be a case of “steady as she sinks”. When he was installed in Ossory, he said that the role of a bishop is “to be a father to his people, a brother to his priests, and a witness of Jesus Christ to the world.”

Although universally recognised as an excellent administrator, he has emphasised in interviews, previous pastoral letters and homilies that his primary focus in reorganisation is how best to meet the spiritual needs of the people he serves.

People who know him expect that the archbishop will also spend the next few months getting to know and care for his priests.

This might seem a clericalist approach but morale is low among priests. The question of who cares for the carers is even more relevant after the ravages of Covid -19. The virus has not only taken the lives of many priests but also taken away the daily interaction with their parishioners, which was a vital source of energy and connection.

What is also needed is to take concrete, practical steps to address something which the new archbishop has spoken about again and again - an underlying crisis of faith

However, lots of laypeople have become involved in stewarding and other roles because of Covid -19. If previous form in Dunboyne Parish is anything to go by, Archbishop Farrell will see those people as a valuable resource, one that should be gathered and strengthened when the immediate crisis of the pandemic passes.

There is also the crisis of Catholic education. In a funeral homily for a much-loved Ossory priest, Monsignor Jim Cassin, the then Bishop Farrell praised him for championing the right of people to have their children educated according to their convictions and helping to re-centre the role and rights of parents and parental choice in Catholic education.

Catholic education badly needs a champion. Divestment of some schools is overdue but the more serious challenge is de facto divestment from within. Many Catholic schools are indistinguishable from secular schools except for some remaining traditions and trappings.

It will be interesting to see whether as part of his teamwork approach, the archbishop restores auxiliary bishops and whether one of them will be given a lead position on Catholic education, as is the case, for example, in the Archdiocese of Westminster.

The church needs a particular kind of leadership right now. Archbishop Farrell has praised Archbishop Emeritus Martin for being the right man at the right time to tackle the sexual abuse of children by clergy.

The Irish Church owes Archbishop Emeritus Martin a great debt of gratitude for that and Archbishop Farrell has vowed to continue that work. But what is also needed is to take concrete, practical steps to address something which the new archbishop has spoken about again and again - an underlying crisis of faith.

No-one has found a magic bullet to solve this in the Western world. The crisis of faith is particularly acute among young people. One approach might be to look at where faith is actually alive and active in the archdiocese, everywhere from small youth groups for teenagers, to online initiatives for young adults, to outreach to the poor, to bustling pastoral centres and to begin to build on what they are doing right. Sometimes, even neighbouring parishes are unaware of successful ventures which could be replicated in their own communities.

While the way ahead remains daunting, the archbishop can take comfort from the fact that even the smallest of steps will be appreciated by a battered Catholic community.