President Joe Biden lukewarm on trial, seeing it as an uncomfortable distraction 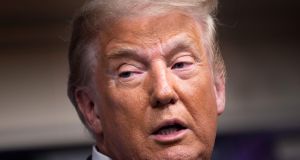 In the three weeks since Joe Biden was inaugurated as the 46th president of the United States, the figure of Donald Trump has faded from public view. Banned from Twitter, living a quiet life at his Mar-a-Lago home in Florida, the former president has kept a low profile as Biden has got to work.

This is set to change this week.

On Tuesday, the second impeachment trial of the former president begins in the US Senate.

For president Joe Biden it is an uncomfortable distraction. Though he has consistently said it is a matter for the Senate, his support for the impeachment process has been reluctant at best. He recently said he believes the numbers are not there to convict Trump, even as he accepts that the trial “has to happen”.

House Speaker Nancy Pelosi has also defended her decision to initiate Trump’s impeachment, which now looks set to overshadow some of the critical early weeks of the Biden presidency, arguing that Trump’s role in inciting the Capitol riots cannot go unpunished.

The nine House impeachment managers who will effectively act as prosecutors in this week’s trial are expected to focus on the events of January 6th, using video coverage as evidence.

Trump’s departure from Washington has left a vacuum at the heart of Republican politics, as congressional Republicans grapple with the Trumpist movement they have inherited

While Trump’s first impeachment centred on his phone call with the Ukrainian president, he now stands trial over a riot that took place in the very building where the trial takes place. The 100 senators who will decide whether to convict the former president were themselves witnesses to the events. Nonetheless, a procedural vote two weeks ago when only five Republicans sided with Democrats indicates that Democrats will not secure the 17 Republican votes needed to convict the former president. Republicans are poised to coalesce behind the argument that the impeachment of a former president is unconstitutional. They argue that, because the punishment for conviction is removal from office, impeachment does not apply to a president no longer in power, even though other former officials, such as judges, have been subject to impeachment trials after leaving office. Focus on process rather than substance may give Republicans the cover to justify a vote against conviction.

But while the outcome of Trump’s second impeachment trial does not seem to be in doubt, it will act as a proxy for the current state of Republican politics.

This week’s case is not just a trial of Donald Trump, it is a trial of the Republican party itself.

Trump’s departure from Washington has left a vacuum at the heart of Republican politics, as congressional Republicans grapple with the Trumpist movement they have inherited.

The shocking events of the January 6th riot sparked a civil war within the Grand Old Party, accelerating a reckoning about the post-Trump landscape that the party was always bound to confront.

The fault line has played out publicly in the controversies involving Wyoming congresswoman Liz Cheney and the newly elected member from Georgia, Marjorie Taylor Greene, that have consumed Washington politics. Cheney, the third-ranking Republican in the House of Representatives and daughter of a former vice-president, dramatically broke with Trump when she voted to impeach him last month. Greene, a Q-Anon supporter whose espousal of right-wing conspiracy theories and comments about Democrats led to the House voting to strip her of her committee assignments last week, has positioned herself as the heir to Donald Trump. “The party is his – it doesn’t belong to anybody else,” she said on Friday, dismissing the Democrats who voted against her as “morons”.

Just as the Republican establishment succeeded in holding their noses and ultimately accommodating Trump, top House Republican Kevin McCarthy skilfully equivocated about Greene – condemning her past comments, while opposing Democrats’ push to remove her from committees on procedural grounds, presaging the technical argument Republican senators are likely to deploy this week.

In a boost to Cheney, she comfortably won a vote of confidence by 145 to 61 during a rancorous party meeting this month after a core group of powerful Republicans on the right sought to oust her, though Cheney’s numbers probably benefited from the fact it was a secret ballot.

The scale of the vitriol against her is evident in her home state of Wyoming. Florida congressman and Trump acolyte Matt Gaetz flew to the state to campaign against Cheney earlier this month. “We are in a battle for the soul of the Republican party, and I intend to win it,” he declared in a demonstration at the state capitol as he urged local Republicans to punish Cheney in the next election.

Similar internecine battles are playing out across the country. In Arizona, a state that flipped to Democrats in November, Republican party officials censured party stalwarts like Jeff Flake and Cindy McCain, the wife of the late John McCain, who were deemed insufficiently loyal to Trumpism.

In other parts of the country, however, a different perspective is evident. During last week’s raucous Republican party meeting, former congresswoman Barbara Comstock argued that the party needed to leave behind Trump or risk losing further ground to Democrats in suburban constituencies.

Nonetheless, Trump still has a decisive grip on his party. Some 64 per cent of Republicans in a recent poll said they would join a new political party if Trump was to form one – a possibility as Trump considers his future. Millions also believe that the Capitol riot was staged by left-wing antifa protesters.

As Republican representatives in Washington try to gauge how the political wind is blowing, this week senators will be forced to go on the record on their view of Trump. With many facing re-election in 2022, their vote in the impeachment trial will be watched closely by millions of voters who will decide their political fate in just over 20 months.